Showing The Martians Have Landed!: A History of Media-Driven Panics and Hoaxes by Robert E. Bartholomew 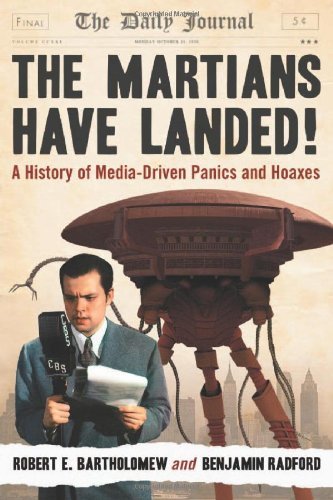 History is replete with examples of media-created scares and panics. This book presents more than three dozen studies of media scares from the 17th century to the 21st century, including hoaxes perpetrated via newspapers, radio, television and cyberspace. From the 1835 batmen on the Moon hoax to more recent bird flu scares and Hurricane Katrina myths, this book explores hoaxes that highlight the impact of the media on our lives and its tendency to sensationalize. Most of the hoaxes covered occurred in the United States, though incidents from Europe, Asia, Africa, South America and Australia are featured as well. Several are global in scope, revealing the power global media wields.