Showing And Only to Deceive by Tasha Alexander 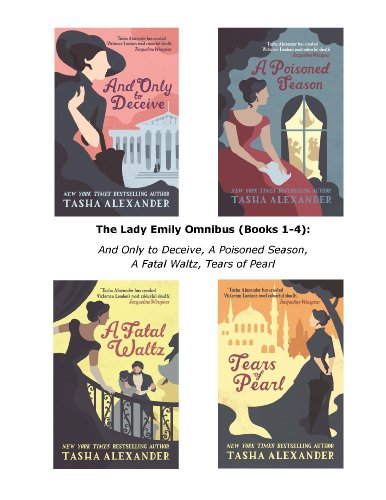 And only to Deceive
A novel of historical suspense set in Victorian England and featuring stolen antiquities, betrayal and murder.

For Emily, accepting the proposal of Philip, Viscount Ashton, was an easy way to escape her stifling home life so when her new husband dies on safari, she feels little grief for she barely knew the man. Now, two years on, when she finds his journals she discovers a very different man to the one she thought she had married – one who was a gentleman scholar who was very much in love with his new wife. Emily becomes fascinated with this new image of her dead husband and immerses herself in his intellectual pursuits, studying Greek and spending time in the quiet corridors of the British Museum.

But there, amid priceless ancient statues, she uncovers a dark, dangerous secret involving stolen artifacts from the Greco-Roman galleries… and as she sets out to solve the crime she discovers even more surprises about her dead husband…
A Poisoned Season
London’s social season is in full swing, and the aristocracy can’t stop whispering about a certain gentleman who claims to be the direct descendant of Louis XIV and Marie Antoinette. Drawing rooms, boudoirs and ballrooms are also abuzz with the latest news of an audacious cat burglar who has been making off with precious items that once belonged to the ill-fated queen.

But light gossip turns serious when the owner of one of the pilfered treasures is murdered and the thief develops a twisted obsession with Lady Emily Ashton as a brewing scandal threatens both her reputation and her private life.
A Fatal Waltz
A deadly dance between two implacable enemies…

At her friend Ivy’s behest, Lady Emily Ashton reluctantly agrees to attend a house party at the country estate of Lord Fortescue, a man she finds as personally odious as he is politically powerful. But on arrival she finds him to be the least of her problems. Among the guests is Kristiana von Lange, an Austrian countess who had once been linked romantically with Emily’s fiancé, Colin Hargreaves, and she makes no secret of that fact, tormenting Emily for her own amusement.

Annoying for Emily – but then matters turn deadly serious when Lord Fortescue is found murdered and his protégé, Robert Brandon – Ivy’s husband – is arrested for the crime. Emily’s efforts to clear her friend’s name take her to Vienna, a place of glittering balls, sordid back streets, chic cafes… and home to her nemesis, the Countess von Lange…
Tears of Pearl
Set amid the beauty and decadence of the Ottoman Empire, Lady Emily's latest adventure is full of intrigue, treachery, and romance.

Looking forward to the joys of connubial bliss, newlyweds Lady Emily and Colin Hargreaves, diplomats of the British Empire, set out toward Turkey for an exotic honeymoon. But on their first night in the city, a harem girl is found murdered, strangled in the courtyard of the sultan's lavish Yildiz Palace. Sir Richard St. Clare, an Englishman who works at the embassy in Constantinople, is present and recognizes the girl as his own daughter who was kidnapped twenty years earlier. Emily and Colin promise the heartbroken father that they'll find her killer, but as the investigation gains speed, they find that appearance can be deceiving-especially within the confines of the seraglio.

As a woman, Emily is given access to the forbidden world of the harem and quickly discovers that its mysterious, sheltered walls offer no protection from a ruthless murderer. As the number of victims grows, Emily must rely on her own sharp wit in a heart-stopping finale if she is to stop a killer bent on exacting vengeance no matter how many innocent lives he leaves in his wake.