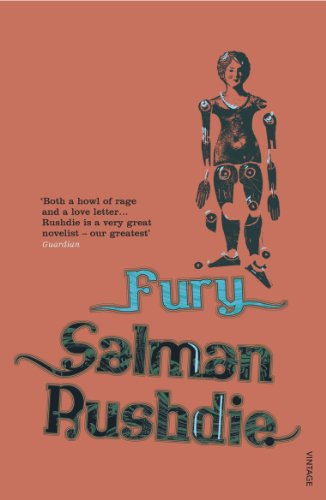 From one of the world's truly great writers, Fury is a wickedly brilliant and pitch-black comedy about a middle-aged professor who finds himself in New York City in the summer of 2000. Not since the Bombay of Midnight's Children have a time and place been so intensely and accurately captured in a novel. Fury opens on a New York living at breakneck speed in an age of unprecedented decadence.

Malik Solanka, historian of ideas and dollmaker extraordinaire, steps out of his life one day, abandons his family without a word of explanation, and flees to New York. There is a fury within him, and he fears that he has become dangerous to those he loves. He arrives in New York at a time of unprecedented plenty, in the highest hour of America's wealth and power, seeking to "erase" himself.

But fury is all around him. Cab drivers spout invective. A serial killer is murdering women with a lump of concrete. The petty spats and bone-deep resentments of the metropolis engulf him. Meanwhile, his own thoughts, emotions and desires are also running wild. A young woman in a D'Angelo baseball cap is in store. Also another woman, with whom he will fall in love and drawn towards a different fury, whose roots lie of the far side of the world.