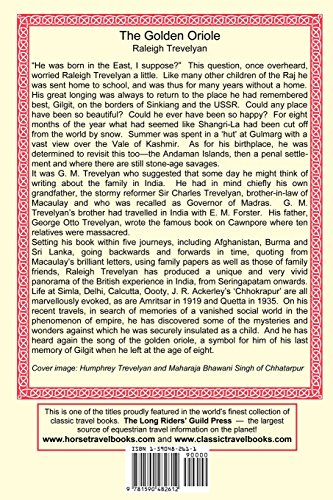 Raleigh Trevelyan's great longing was always to return to the place he had remembered best, Gilgit, on the borders of Sinkiang and the USSR. Could any place have been so beautiful? Could he ever have been so happy? For eight months of the year what had seemed like Shangri-La had been cut off from the world by snow. Summer was spent in a 'hut' at Gulmarg with a vast view over the Vale of Kashmir. As for his birthplace, he was determined to revisit this too-the Andaman Islands, then a penal settlement and where there are still stone-age savages. It was G. M. Trevelyan who suggested that some day he might think of writing about the family in India. He had in mind chiefly his own grandfather, the stormy reformer Sir Charles Trevelyan, brother-in-law of Macaulay and who was recalled as Governor of Madras. G. M. Trevelyan's brother had travelled in India with E. M. Forster. His father, George Otto Trevelyan, wrote the famous book on Cawnpore where ten relatives were massacred. Setting his book within five journeys, including Afghanistan, Burma and Sri Lanka, going backwards and forwards in time, quoting from Macaulay's brilliant letters, using family papers as well as those of family friends, Raleigh Trevelyan has produced a unique and very vivid panorama of the British experience in India, from Seringapatam onwards. Life at Simla, Delhi, Calcutta, Oooty, J. R. Ackerley's 'Chhokrapur' are all marvellously evoked, as are Amritsar in 1919 and Quetta in 1935. On his recent travels, in search of memories of a vanished social world in the phenomenon of empire, he has discovered some of the mysteries and wonders against which he was securely insulated as a child. And he has heard again the song of the golden oriole, a symbol for him of his last memory of Gilgit when he left at the age of eight.