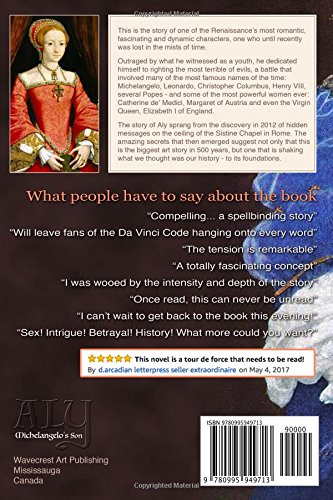 You will not find a book more startling in its revelations, or one that more completely shatters all we thought we knew about our past. There is, you see, a very dark side to our history, one we could never, even in our wildest dreams, have imagined. What really happened has been hidden for centuries by the rich and powerful, scared of what we might do with the truth. And at the centre of it all was a boy born after a brief affair between a youthful Michelangelo, and an African slave girl. His name was Aly, and he tells us his amazing story now as an old man looking back for the meaning of his life, and awaiting the assassins who would eventually take it. His words slowly undermine what we thought was the palace our past, rocking its foundations until it crumbles to dust. He reveals how the Princes did not die in the Tower, and how Edward V - unable to unseat Henry VIII, took a new name and made it famous. He tells how the ex-king married the daughter of a lady whose face is still known to everyone across the planet, and how his grandson poisoned the King of England. He exposes too, how Columbus stole the fame of discovery from his two captains, captains that had illegally voyaged to the Americas three years before. We shudder as he witnesses the horrors that Columbus unleashed upon the people of the Caribbean, and watch as he dedicates his life to resisting Spain’s plan to make the world its slave. We glimpse him help his father paint the amazing frescos of the Sistine Chapel, and hear how - when Michelangelo’s nephew was brutally murdered - he immortalised the lad as Adam, and hid a vast denunciation of the Pope right across that most famous of ceilings. Through Aly's eyes we experience a Leonardo we have until now barely glimpsed, and as an eyewitness to its painting, we discover the horrific blueprint hidden in the backdrop of the Mona Lisa. We watch as he seduces the most powerful woman in Europe, fathers a poet, a painter, and one of the founders of modern medicine… We listen as he explains how he plotted and carried out the assassinations of some of the most famous - and evil - characters of his time, kings and popes no less… He describes his experiences travelling to Japan… and how he came to meet - and fall in love with a young princess, later to become the Virgin Queen. He reveals how he blocked her evil sister’s scheme to marry the Princess off to the Duke of Savoy, and make her his housewife. And of the black boy the now pregnant princess then gave birth to. With Elizabeth now installed on the throne of England, he describes how he sparked the great alliance between England and the Cimarrons, the African slaves taken to the Caribbean, slaves who then escaped Spain’s cruel rule and became allies who - with Sir Francis Drake - helped provide the vast hoards of silver and gold Elizabeth used to build her navy - the navy that saved England from the Spanish Armada. It is a tale that will, page by page, not only take your breath away, but one that changes how we see the world around us. It exposes how ‘truth’ is created to deceive, and how fairy tales can be transformed into ‘history’. It is a book for those who do not fear their most basic ideas being challenged, but more importantly, it is a book for the 21st Century, when all we hold dear is in peril from avaricious billionaires, and the corrupt and twisted politicians that work for them.