Showing Spiritus Mundi Book I: The Novel by Robert Sheppard 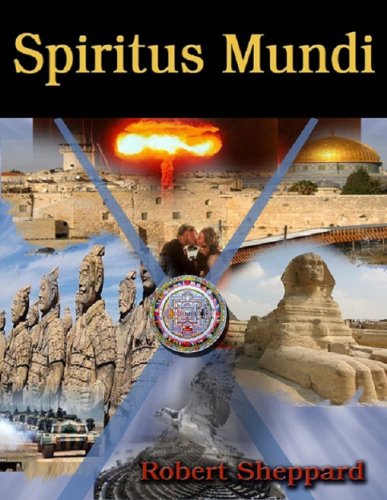 Robert Sheppard's thriller novel, Spiritus Mundi, is an unforgettable read and epic journey bringing to life the sexual and spiritual lives of struggling global idealists overcoming despair, nuclear terrorism, espionage and a threatened World War III to to bring the world together from the brink of destruction with a revolutionary United Nations Parliamentary Assembly and spiritual rebirth.

In two parts, this riveting dual “global novel” features espionage-terror-political-religious thriller-action criss-crossing the globe involving MI6. the CIA and Chinese MSS Intelligence as a "New Axis" alliance of China-Russia-Iran prepares to invade the Mid-East oil reserves to bring the West to its knees.

Global idealists leading a worldwide Bono-Geldof-style "People Power" campaign to establish a United Nations Parliamentary Assembly on the model of the European Parliament for global democracy struggle with personal despair, failed and flourishing sexual love affairs, infiltration by nuclear terrorists and CIA counter-terror agents in a stream of never-ending action moving from Beijing to London to Washington, Mexico City and Jerusalem----a vast panorama of the contemporary international world, ever-compelling action and surreal adventures.


Book II, dilates the setting, scope and continuing action as a fantasy-adventure Romance where the protagonists, still enmehed in the original action of Book I, embark on a transformed quest in a mythical dimension to the realms of Middle Earth's Crystal Bead Game on whose outcome human destiny on Earth depends, then onwards in quest of the Missing Silmaril Seed Crystal through a cosmic wormhole to the "Council of the Immortals" at the black hole-center of the Milky Way Galaxy, a crusade which will determine either continuance of the human race or extinction from nuclear Armageddon.

“Robert Sheppard's exciting new novel, Spiritus Mundi, is an unforgettable read and epic journey of high adventure and self-discovery across the scarred landscape of the modern world and into the mysteries beyond....This modern epic is a must read and compelling vision of the future for all Citizens of the Modern World and a beacon of hope pointing us all towards a better world struggling against all odds to be born.” May, 2012

Lara Biyuts, Reviewer and Blogger at Goodreads.com and Revue Blanche


“Longing for a thrilling experience of the sexual and spiritual world? Expecting a thorough summoning of your inner heart? Aspiring to find an extraordinary voice to enlighten your understanding heart? Then you can’t miss this extraordinary novel, Spiritus Mundi by Robert Sheppard. The author will spirit you into a exciting world filled with fantasy, myth, conflicts and wisdom from a fresh perspective. Don’t hesitate, just turn to the 1st page and start out enjoying this marvellous journey.”November, 2012

“Robert Sheppard's novel, "Spiritus Mundi," has everything. "Spiritus Mundi" is Latin, meaning "spirit" or "soul of the world." According to the Norton Anthology of English Literature, the phrase refers to "the spirit or soul of the universe" with which all individual souls are connected through the "Great Memory." This amazing novel is all inclusive and unceasingly riveting. If you are interested in politics, philosophy, human relationships, sex, intrigue, betrayal, poetry and even philosophy --- buy and read "Spiritus Mundi"!” November, 2012


“Read Robert Sheppard's sprawling, supple novel, Spiritus Mundi, an epic story of global intrigue and sexual and spiritual revelation. Compelling characters, wisdom, insight, and beautiful depictions of locations all over the world will power you through the book. You'll exit wishing the story lines would go on and on.” May, 2012