Showing Into Hell's Fire: A Deadly Game Played In The World's Most Dangeous City - Sarajevo by Douglas Cavanaugh 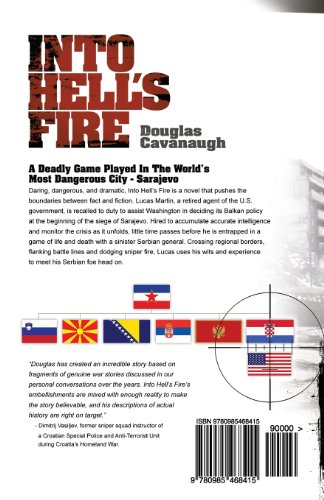 A novel that will appeal broadly to international readers, Into Hell's Fire is an espionage thriller set in war-torn Bosnia and Croatia. Daring, dangerous, and dramatic, the story pushes the boundaries between fact and fiction. Lucas Martin, a retired agent of the U.S. government, is recalled to duty to assist the U.S. State Department in deciding its Balkan policy at the beginning of the Siege of Sarajevo. Hired to accumulate accurate intelligence and monitor the crisis as it unfolds, little time passes before he is entrapped in a game of life and death with a sinister Serbian general. Crossing regional borders, flanking battle lines and dodging sniper fire, the stakes soon rise until the two players meet in a final standoff where there can be only one victor. Finally, Lucas is forced to battle his opponent face to face in a dramatic showdown. But does Lucas still have what it takes to save his life against overwhelming odds and when the stakes have never been higher? Will good trump evil in a world where rules and morality have been left by the wayside? Readers of Into Hell's Fire will find answers to these questions and much, much more.