Showing Talons of the Condor by John Simpson 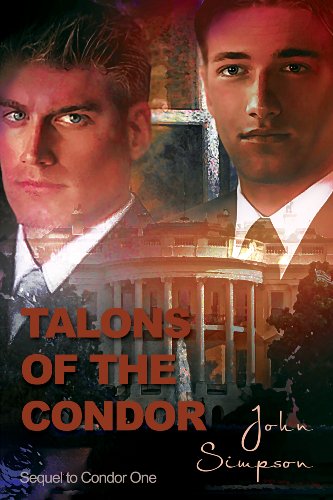 Sequel to Condor One
Condor One: Book Two

David J. Windsor, the first openly gay president of the United States, has his hands full. After surviving an assassination attempt, he's now dealing with the fallout: finding all of the culprits is at the top of his list. Will his enemies give up trying to bring down the administration, or will they try again? In the meantime, he has to deal with fractious allies, hidden foes, the vice president's kidnapped son, and secrets that tear at his heart—including his relationship with his lover, Shane Thompson, who is also his Secret Service agent.

While they want to live a more open life, it's impossible while David is in office; the demands of the job and the constant spotlight would tear even the most devoted couple apart. Throw in David's attempts to help gay teens and they're living in a pressure cooker that threatens to boil over. Will David be able to get a handle on the intrigue and danger of his job and find a way to keep his lover as well? Or will Shane become a casualty of Condor One's political decisions?