Showing The Economy of Renaissance Florence by Richard A. Goldthwaite 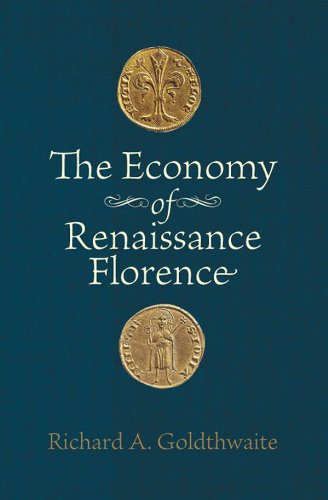 Richard A. Goldthwaite, a leading economic historian of the Italian Renaissance, has spent his career studying the Florentine economy. In this magisterial work, Goldthwaite brings together a lifetime of research and insight on the subject, clarifying and explaining the complex workings of Florence’s commercial, banking, and artisan sectors. Florence was one of the most industrialized cities in medieval Europe, thanks to its thriving textile industries. The importation of raw materials and the exportation of finished cloth necessitated the creation of commercial and banking practices that extended far beyond Florence’s boundaries. Part I situates Florence within this wider international context and describes the commercial and banking networks through which the city's merchant-bankers operated. Part II focuses on the urban economy of Florence itself, including various industries, merchants, artisans, and investors. It also evaluates the role of government in the economy, the relationship of the urban economy to the region, and the distribution of wealth throughout the society. While political, social, and cultural histories of Florence abound, none focuses solely on the economic history of the city. The Economy of Renaissance Florence offers both a systematic description of the city's major economic activities and a comprehensive overview of its economic development from the late Middle Ages through the Renaissance to 1600.