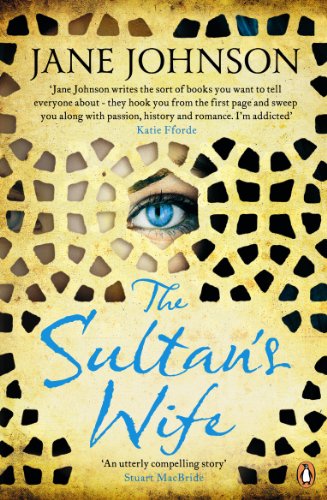 The author of The Salt Road and The Tenth Gift Jane Johnson returns with a captivating historical novel set in Morocco, The Sultan's Wife.

The year is 1677. Behind the magnificent walls and towering arches of the Palace of Meknes, captive chieftain's son and now a lowly scribe, Nus Nus is framed for murder. As he attempts to evade punishment for the bloody crime, Nus Nus finds himself trapped in a vicious plot, caught between the three most powerful figures in the court: the cruel and arbitrary Sultan Moulay Ismail, one of the most tyrannical rulers in history; his monstrous wife Zidana, famed for her use of poison and black magic; and the conniving Grand Vizier. Meanwhile, a young Englishwoman named Alys Swann has been taken prisoner by Barbary corsairs and brought to the court . She faces a simple choice: renounce her faith and join the Sultan's harem; or die. As they battle for survival, Alys and Nus Nus find themselves thrust into an unlikely alliance - an alliance that will become a deep and moving relationship in which these two outsiders will find sustenance and courage in the most perilous of circumstances.

From the danger and majesty of Meknes to the stinking streets of London and the decadent court of Charles II, The Sultan's Wife brings to life some of the most remarkable characters of history through a captivating tale of intrigue, loyalty and desire.

'Jane Johnson writes the sort of books you want to tell everyone about - they hook you from the first page and sweep you along with passion, history and romance. I'm addicted' Katie Fforde

'An irresistible page turner - I loved it' Barbara Erskine

'Full of intrigue, deceit, skulduggery and murder. It has romance in it, but also heartbreak and personal tragedy. It's deeply evocative of North Africa - the sights, the smells, the culture, but there are also great depictions of London at the time, and the court of Charles II. I really enjoyed it' Ben Kane, best-selling author of Spartacus: The Gladiator

'Far more than a rip-roaring read: it's a true work of art. Deftly recreating the court intrigue of the tyrannical Moroccan Sultan Moulay Ismail - with all its trappings of superstition, black magic and torture - it sucks you down through interleaving layers steeped in blood, sweat and raw adrenalin, to a mesmerising bedrock of real history... The Sultan's Wife gets inside you, conjuring its magic long after you read the last line' Tahir Shah, author of The Caliph's House

Jane Johnson was raised in Cornwall but now lives for half the year in a remote mountain village in Morocco. Her first novel set in North Africa is The Tenth Gift, and this was followed by The Salt Road. The Sultan's Wife is her third Moroccan novel. She has been involved in the book industry for many years and combines her work as a publisher with writing for both adults and children.