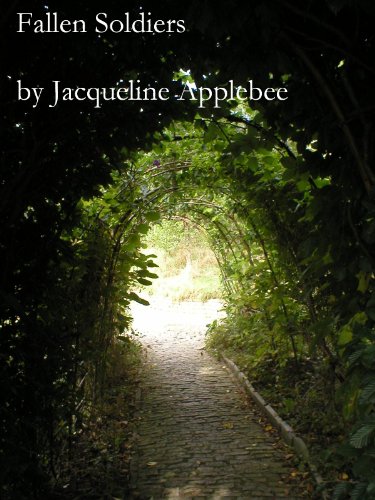 Love can bring you home, no matter where you are. For Sarah, love spans the barrier of death, to bring two fallen soldiers back to the present.

Ernest and Albert are ghosts, each freed from statues that held their essence by Sarah, who possesses an amazing ability, unknown to anyone including her.

When one of her friends mysteriously disappears, Sarah has to learn how to fight for the people she cares about, and finds an inner power that makes her strong enough for any challenge. She is rewarded for her bravery by the love and support of her lovers, both living and undead.

This title was previously published by Liquid Silver Books.


After my lovely food, I lay exhausted and boneless on
my large bed, stripped down to my short, white cotton top and my new black
knickers, enjoying the cooling breeze of the whirling overhead fan. It was
blessedly quiet in the guesthouse, and the air coming through the open window
smelt of fresh grass and newly turned earth. I exhaled, smiling, and rolled
over onto my side, looking with sudden fright into the inquiring grey eyes of
the ghostly soldier. Our noses were practically touching, and I froze, stunned,
unable to even breathe.


"You brought me home," he whispered.


"I know who you are," I managed to get the words out,
as I shuffled back a fraction on the bed.

"You're not real. You're a bloody
statue!" I stuttered on the words.


"Who I am ... Who I used to be doesn't matter. What I
do now is important," he murmured, and with that, he reached over and stroked
my face, then lowered his hand to where my top opened up. I shivered with the
cold as he swept his pallid hands over me. Moving into his touch, my
reservations and fear dissipated as he caressed me lovingly.


"This is where I belong," he said wistfully, as his
hands moved to my armpits, beneath the fabric of my top. He pulled it over my head
in a single, rough tug, and I was aware of goose bumps all over my brown skin.


"I've been away so long," he moved to kiss beneath the
band of my black bra, licking the exposed flesh that I had never paid attention
to before.


"The fellows from the farm are gone--" He kissed the
insides of my bent elbows, flicking a long, able tongue over my skin. "--all
killed in the battle of the Somme."


I groaned out loud and undulated on the bed, spreading
out like melting butter. I felt something new, as if I had only now become
aware of my whole self. The skin that covered my yearning body glistened in
shades of warm brown. I was suddenly more than just tits and a clit. I had a
body, a body that wanted to be explored.


The strange, ghostly soldier stretched out, pressing
his chilly length up against me, and I could feel the, heavy prod of his
erection against my thigh. He moved down to my calves, spreading my legs gently
with hands colder than any doctor's. My sweaty scent, from a day spent
travelling, rose up, enveloping us, and he lapped at the backs of my knees,
making me wriggle, jiggling my breasts as I moved against the sheets.


"My name is Ernest," he whispered into my crotch, as
if introducing himself to my sex. The walls of my pussy clenched in a sequence
of pulses, as if I were responding to his words with some kind of internal
Morse code. I looked down at my body in wonder. I felt like I was burning up
and couldn't take much more without being completely naked. I needed to feel
everything, everywhere, and my clothes were just getting in the way. I unhooked
my bra and shuffled out of my knickers, lying bare and exposed before him.