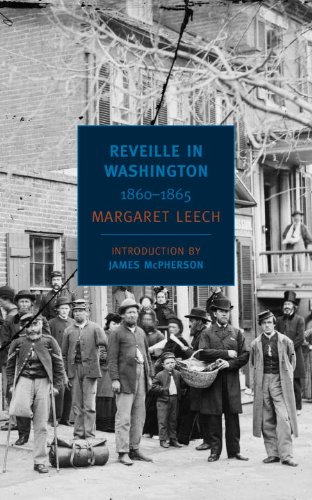 1860: The American capital is sprawling, fractured, squalid, colored by patriotism and treason, and deeply divided along the political lines that will soon embroil the nation in bloody conflict. Chaotic and corrupt, the young city is populated by bellicose congressmen, Confederate
conspirators, and enterprising prostitutes. Soldiers of a volunteer army swing from the dome of the Capitol, assassins stalk the avenues, and Abraham Lincoln struggles to justify his presidency as the Union heads to war.

Reveille in Washington focuses on the everyday politics and preoccupations of Washington during the Civil War. From the stench of corpse-littered streets to the plunging lace on Mary Lincoln’s evening gowns, Margaret Leech illuminates the city and its familiar figures—among them Abraham Lincoln, Jefferson Davis, Robert E. Lee, William Seward, and Mary Surratt—in intimate and fascinating detail.

Leech’s book remains widely recognized as both an impressive feat of scholarship and an uncommonly engrossing work of history.