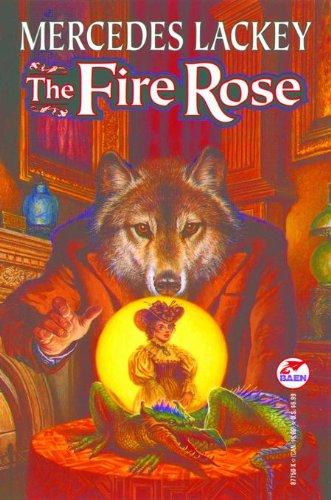 Accepting employment as a governess after hard times hit her family, medieval scholar Rosalind Hawkins is surprised when she learns that her mysterious employer has no children, no wife, and she is not to meet with him face to face. Instead, her duties are to read to him, through a speaking tube, from ancient manuscripts in obscure, nearly-forgotten dialects.

A requirement for the job was skill in translating medieval French, and she now understands the reason for that requirement, and assumes her unseen employer’s interest in the descriptions of medieval spells and sorcery is that of an eccentric antiquary. What she does not realize is that his interest is anything but academic. He has a terrible secret and is desperately searching for something that can reverse the effects of the misfired spell which created his predicament.

Mercedes Lackey, author of the bestselling Heralds of Valdemar and Bardic Voices series, began life as a child and has been attempting to rectify that error ever since. Named for actress Mercedes McCambridge, she has been trying with no success to get the Benz automobile authorities to recognize the natural link between her name and theirs, and offer her the use of an M100 or some variety of high-end sports car for gratis. This, too, has had a distinct lack of success. Other than writing she can be found at various times prying the talons of the birds of prey she is attempting to nurse back to health out of her hands, endangering her vision by creating various forms of Art Beadwork, and cross-stitching dragons, gryphons, and other semi-mythological fauna. At the moment, her hair is red, her favorite color is green, and she is covered by various members of her flock of pet parrots, cockatoos and macaws, all of which are trying to help her type8shgalal-akejbejks9ife.