Showing Raven: The Untold Story of the Rev. Jim Jones and His People by Tim Reiterman 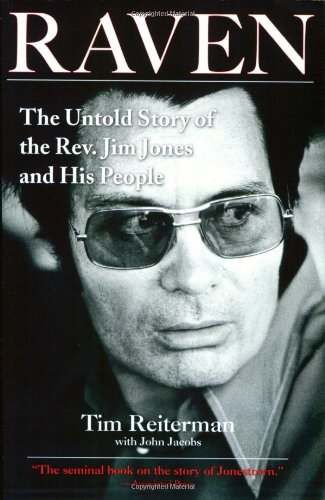 Paperback. Pub the Date: November 2008 Pages: 688 in Publisher: Penguin Group. (USA) Incorporated. For the first time in. paperback. Tim Reiterman's Raven provides the definitive history of the Rev.. Jim Jones. the Peoples Temple and the murderous ordeal at Jonestown three decades ago. This PEN Award-winning work explores the ideals-gone-wrong. the intrigue. and the grim realities behind the Peoples Temple and its implosion in the jungle of South America. Reiterman's reportage clarifies enduring misperceptions of the character and motives of Jim Jones. the reasons why people followed him. and the important truth that many of those who perished at Jonestown were victims of mass murder rather than suicide.This widely sought work is restored to print after many years with a new preface by the author . as well as the more than sixty-five rare photographs from the original volume.