Showing The Civil War, a narrative : Fort Sumter to Perryville by Shelby Foote 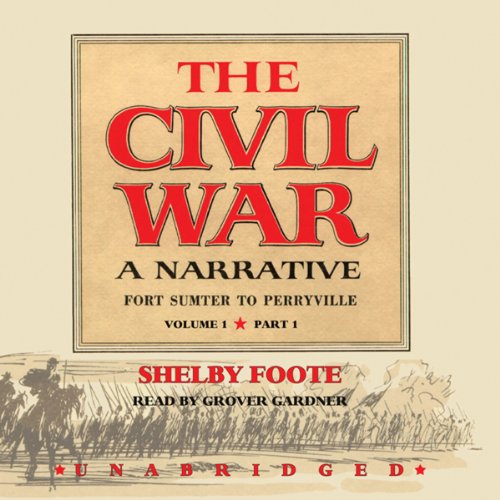 Here begins one of the most remarkable works of history ever fashioned. All the great battles are here, of course, from Bull Run through Shiloh, the Seven Days, Second Manassas to Antietam, and Perryville in the fall of 1862, but so are the smaller and often equally important engagements on both land and sea: Ball's Bluff, Fort Donelson, Pea Ridge, Island Ten, New Orleans, Monitor versus Merimac, and Stonewall Jackson's Valley Campaign, to mention only a few.

And perhaps never before have these conflicts been so clearly, so dramatically, and so excitingly presented. The word "narrative" is the key, not only to this extraordinary book's incandescence, but also to its truth. The story is told entirely from the point of view of the people involved in it. The listener not only learns what was happening in the North and South, on the political, military, diplomatic, and home fronts, he lives through the events as if he were there. This is the way it was, in its entirety, as far as Shelby Foote could discover it during years of exhaustive research.