Showing The Anatomist by Federico Andahazi 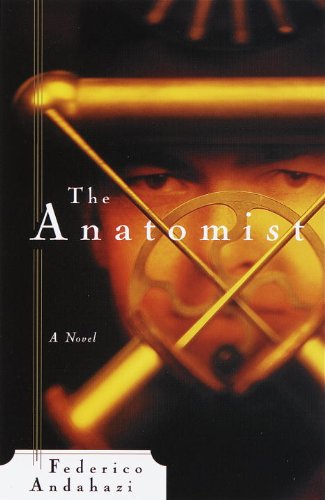 O my America, my new-found-land!" Mateo Renaldo Colombo (or Columbus, to give him his English name) might have written in his De re anatomica.

It is no accident that Federico Andahazi draws a parallel between his Renaissance hero, the anatomist Mateo Colombo, and the explorer Christopher Columbus. It is the conceit of his first novel, The Anatomist (beautifully translated from the Spanish by Alberto Manguel), that both made "equally momentous and disturbing" discoveries. Every schoolchild can tell you what Columbus's was; less well known, perhaps, is that of his countryman and fellow "explorer". "Mateo's America is less distant and infinitely smaller than Christopher's; in fact, it's not much larger than the head of a nail." In short, Mateo Renaldo Colombo discovered the Amor Veneris, the clitoris.

Andahazi makes much of this discovery, not to mention its discoverer: "The discovery of Mateo Colombo's America was, all things considered, an epic counterpointed by an elegy. Mateo Colombo was as fierce and heartless as Christopher. Like Christopher (to use an appropriate metaphor) he was a brutal coloniser who claimed for himself all rights to the discovered land, the female body." Certainly women readers will view this description with at least as much irony as Native Americans regard that other "discovery" of a land they had known about all along.

The Anatomist is based on a historical figure and historical fact; what Andahazi provides is his title character's heart and soul. The fictional Colombo is driven by desire for the high-priced courtesan Mona Sofia. Though Mateo adores her, the heartless Sofia regards him as nothing more than a paying customer. After breaking both his heart and his bank account over her, Colombo returns to his native Padua whence he is eventually called to Florence to treat a saintly young widow, Inés de Torremolinos. Inés is "infinitely beautiful", and her illness is "far from common". While examining her, he discovers "between his patient's legs a perfectly formed, erect and diminutive penis". Land ho.

Though Colombo's "discovery", first in Inés and then in other women, offers plenty of opportunity for eroticism, the most compelling aspect of The Anatomist lies in the Church's reaction to De re anatomica, the book Colombo writes detailing his find. The Renaissance may well have signalled the birth of new art, science, and philosophy, but it was also the age of Inquisition--and Colombo's unfolding of "the key to the heart of all women ... the anatomical cause of love" soon lands him in prison on charges of heresy and Satanism. The trial, Mateo's defence, and the surprising aftermath make for provocative reading and raise The Anatomist above the level of the merely erotic to a more intriguing philosophical plane, one that is sure to prompt a lively discussion or two. --Alix Wilber