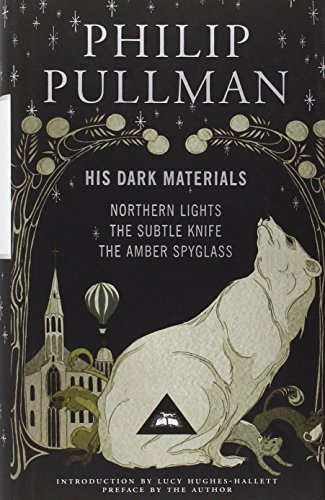 The Northern Lights
Lyra's life is already sufficiently interesting for a novel before she eavesdrops on a presentation by her uncle Lord Asriel to his colleagues in the Jordan College faculty, Oxford. The college, famed for its leadership in experimental theology, is funding Lord Asriel's research into the heretical possibility of the existence of worlds unlike Lyra's own, where everyone is born with a familiar animal companion, magic of a kind works, the Tartars are threatening to overrun Muscovy, and the Pope is a puritanical Protestant. Set in an England familiar and strange, Philip Pullman's lively, taut story is a must-read and re-read for fantasy lovers of all ages. The world-building is outstanding, from the subtle hints of the 1898 Tokay to odd quirks of language to the panserbjorne, while determined, clever Lyra is strongly reminiscent of Joan Aiken's Dido Twite.

The Subtle Knife
At the end of The Northern Lights, Lyra Silvertongue watched in fear and fascination as her father, Lord Asriel, created a bridge between worlds. Lyra and her daemon, Pantalaimon, are now lost in an alternate universe where they meet Will Parry, a fugitive from a third universe. Will has found a small window between Cittagazze (a place where children roam unchecked but invisible Specters suck the spirit out of adults) and his Oxford, which, with its Burger Kings and cars, is frighteningly different from the Oxford Lyra knows. Will's father, an explorer, disappeared years ago, but recently some odd characters have started asking questions about him, and now, having accidentally killed one of them, Will is wanted by the police. Armed with The Subtle Knife, a tool that cuts any material (including that which separates universes) and Lyra's alethiometer, the children set out to find John Parry, with adults of various stripes in desperate pursuit. Lyra's finest qualities--her courage and quick mind--are stretched to the limit as she has to lie, cheat and steal to keep herself and Will out of danger. However, she must also learn when to tell the truth and when to trust, for though she does not yet know it, she has a huge part to play in the upcoming battle between Good and Evil.

The Amber Spyglass
Philip Pullman began the spellbinding His Dark Materials sequence with The Northern Lights, which dazzled everyone who read it, children and adults alike. Remarkably, he kept up the quality in The Subtle Knife, the second title in the trilogy. Here he brings the series to an extraordinary conclusion. Will and Lyra, the two children at the heart of the books, have become separated amid great dangers. Can they find each other, and their friends? Then complete their mysterious quest before it is too late? The great rebellion against the dark powers that hold Lyra's world in thrall (and many others) is nearing its climax. She and Will have crucial parts to play, but they don't know what it is that they must do, and terrible powers are hunting them down.

The pace of the book is compelling, the writing powerful. Pullman's plotting is intricate and cunning, surprising the reader again and again. In this volume the cosmic dimensions of the story become more prominent, as a great conflict across many universes comes to a head. The author's beliefs also come more into the open. Perhaps what is most striking of all, however, is the depth of the characterisation. Lord Asriel, Mrs Coulter, Iorek Byrnison the king of the armoured bears, a host of minor characters, most of all Will and Lyra themselves: the book is a library of beautifully drawn, remarkably convincing characters walking in worlds of marvels. Philip Pullman's writing commands immense respect; more than that, it is raising the profile of the best children's books among adults, as demanding critics of all ages fall in love with this remarkable trilogy. --David Pickering