Showing One Night of Scandal by Teresa Medeiros 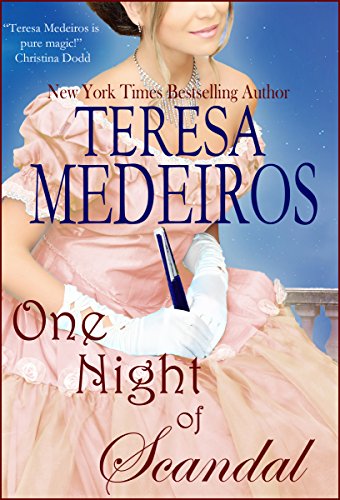 Can One Night of Scandal lead to a lifetime of love in this delightful Regency?


Carlotta Anne Fairleigh has spent most of her girlhood savoring the thrilling pleasures of Gothic novels. She dreams of writing her own story of murder and mayhem, but when a bungled spying attempt ignites a torrid scandal on the very night of her debut into London society, she finds herself cast as the reluctant heroine in a real-life drama. Her reputation in ruins, she finds herself whisked away to a forbidding mansion on the rugged coast of Cornwall by Hayden St. Clair, the man society has dubbed "the Murderous Marquess."

The intrepid Lottie refuses to be intimidated by the ghost of his first wife, who is rumored to wander the mansion by night, wailing for justice. It is Hayden himself who proves to be the greatest danger. For only by surrendering herself to him, body and soul, can she discover if the seductive pleasures of his touch will bring her chills or thrills, doom or delight.

"In both humorous and sensual scenes, Medeiros's talent touches every page, making One Night of Scandal glisten like gold."--Publishers Weekly

"Romance, passion, mystery, tenderness and humor are blended to perfection by a true master of the craft. No wonder Medeiros is adored by fans both new and old!"--Romantic Times

"A delight! Inviting...beguiling...an exceptional read filled with charming characters who tug at the heartstrings."--Romance Reviews Today

"Only a select few have voices that sing on the page. Teresa Medeiros is such an author."--Milwaukee Journal-Sentinel

Book 2 of the FAIRLEIGH SISTERS DUET (Book 1 is A KISS TO REMEMBER.)
ENGLISH LANGUAGE EDITION