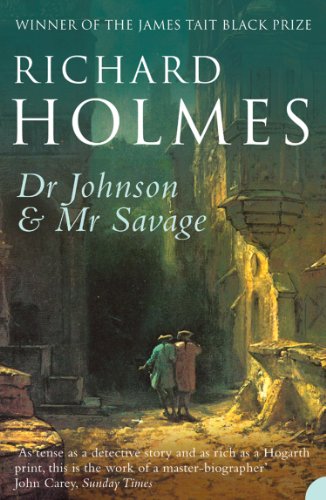 A classic reissue of Richard Holmes’s brilliant book on Samuel Johnson’s friendship with the poet Richard Savage, which won the James Tait Black Prize for Biography.

Dr Johnson & Mr Savage is the story of a mysterious eighteenth-century friendship. Richard Savage was a poet, playwright and convicted murderer who roamed through the brothels and society salons of Augustan England creating a legend of poetic injustice. Strangest of all his achievements was the friendship he inspired in Samuel Johnson, then a young, unknown schoolmaster just arrived in London to seek his literary fortune. This puzzling intimacy helped to form Johnson’s experience of the world and human passions, and led to his masterpiece The Life of Richard Savage, which revolutionized the art of biography and virtually invented the idea of the poet as a romantic, outcast figure.

Richard Holmes gradually reconstructs this alliance, throwing suprising new light on the character of Dr Johnson. This extraordinary book also questions the very nature of life-writing and exposes the conflicts between friendship, truth and advocacy which the modern form has inherited.