Showing The Charterhouse of Parma by Stendhal 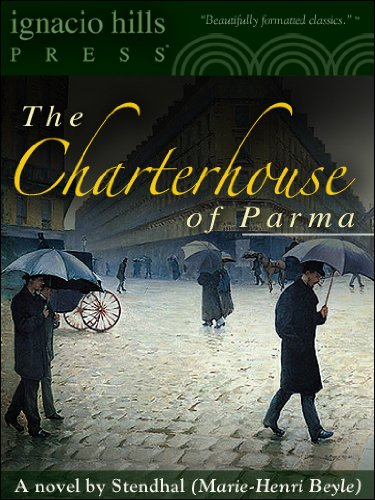 NOTE: This edition has a linked "Table of Contents" and has been beautifully formatted (searchable and interlinked) to work on your Amazon e-book reader, Amazon Desktop Reader and your ipod e-book reader.

Marie-Henri Beyle (January 23, 1783 – March 23, 1842), better known by his penname Stendhal, was a 19th-century French writer. Known for his acute analysis of his characters' psychology, he is considered one of the earliest and foremost practitioners of realism.

The Charterhouse of Parma is often cited as an early example of realism, a stark contrast to the Romantic style popular while Stendhal was writing. It is considered by many authors to be a truly seminal work; Honoré de Balzac considered it the most significant novel of his time, André Gide thought it the greatest French novel ever.

The Charterhouse of Parma tells the story of the young Italian noble Fabrizio del Dongo and his misadventures during the age of Napoleon. The events center in the town of Parma and a castle on Lake Como, both in Italy, but other sites across Europe are also featured, including the Battle of Waterloo, at which Fabrizio fights for Napoleon.

Fabrizio's aunt, the femme fatale Gina, Duchess of Sanseverina, and her innamorato, the scheming Prime Minister, Count Mosca, concoct a plot to advance Fabrizio's career in the court of Parma. Gina is subject to the unwelcome advances of the obnoxious Prince Ranuce-Erneste IV, which she is engaged in repelling. It could easily be argued that Gina and Count Mosca are the true heroes of the novel.

Fabrizio is arrested for murder and imprisoned in the Farnese tower, from which he escapes with a rope; he also has a difficult love affair with his jailer's daughter, Clelia.