Showing Fire in the City: Savonarola and the Struggle for the Soul of Renaissance Florence by Lauro Martines 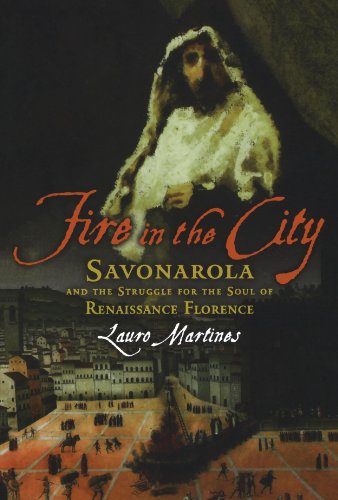 A gripping and beautifully written narrative that reads like a novel, Fire in the City presents a compelling account of a key moment in the history of the Renaissance, illuminating the remarkable man who dominated the period, the charismatic Girolamo Savonarola.
Lauro Martines, whose decades of scholarship have made him one of the most admired historians of Renaissance Italy, here provides a remarkably fresh perspective on Savonarola, the preacher and agitator who flamed like a comet through late fifteenth-century Florence. The Dominican friar has long been portrayed as a dour, puritanical demagogue who urged his followers to burn their worldly goods in "the bonfire of the vanities." But as Martines shows, this is a caricature of the truth--the version propagated by the wealthy and powerful who feared the political reforms he represented. Here, Savonarola emerges as a complex and subtle man, both a religious and a civic leader--who inspired an outpouring of political debate in a city newly freed from the tyranny of the Medici. In the end, the volatile passions he unleashed--and the powerful families he threatened--sent the friar to his own fiery death. But the fusion of morality and politics that he represented would leave a lasting mark on Renaissance Florence.
For the many readers fascinated by histories of Renaissance Italy--such as Brunelleschi's Dome or Galileo's Daughter, and Martines's acclaimed April Blood--Fire in the City offers a vivid portrait of one of the most memorable characters from that dazzling era.