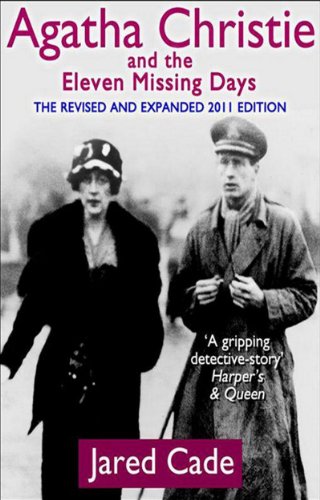 NOW OPTIONED AS A FILM

IN DECEMBER 1926 Agatha Christie disappeared in bizarre circumstances from her home in southern England. The discovery of the crime writer's abandoned car led to the biggest manhunt in British history for a missing person. Eleven days later she was found in a northern spa town claiming to be the victim of amnesia.

Until the publication of this book in 1998 none of her biographers had come up with conclusive evidence as to what Agatha Christie did within the first twenty-four hours after she disappeared or whether her memory loss was genuine. Although the newspaper headlines made her famous, the private anguish that surrounded the episode ensured that she made no reference to it in her memoirs.

Jared Cade's acclaimed biography - on which a BBC television documentary has been based - provides the answers to the mystery, including Agatha Christie's long forgotten explanation of the notorious episode, along with startling accounts by her surviving relatives that reveal for the first time why she staged the disappearance with the help of a co-conspirator and how it all went terribly wrong. His sympathetic investigation reveals the incidents that shaped her character and how the fall-out from the episode affected the rest of her life.

Illustrated with 60 photographs, many of them from private albums, this fully expanded 2011 ebook edition draws on a newly discovered cache of family papers, diaries and letters, to which Jared Cade was given exclusive access, and reveals even more fascinating secrets about her life and works. Agatha Christie and the Eleven Missing Days: The Revised and Expanded 2011 Edition is a must for all Christie devotees.

'This is the only biography that tells Agatha's life story as it really was. Jared Cade's insight into her personality is unsurpassed.' Judith and Graham Gardner, relatives of Agatha Christie

'Jared Cade is an acknowledged expert on Christiana and Agatha Christie and the Eleven Missing Days has received much acclaim for its impressively detailed examination of the Queen of Crime's disappearance.' Crime Time

JARED CADE was born in 1962 and lives in London. He is a lifelong fan of Agatha Christie, and in 1993 he appeared on The 64,000 Dollar Question, correctly answering all questions on his specialist subject of Agatha Christie's novels and winning what was then British television's biggest cash prize.

While researching his biography about Agatha Christie's life he located several short stories she had written in the 1920s that had escaped detection by scholars for decades. In 1997 they were published for the first time in the collection While the Light Lasts. He also traced copies of two missing and unpublished Agatha Christie plays, Chimneys and A Daughter's A Daughter, both of which have since been performed in Great Britain. He acted as a research consultant in 1997 for the BBC documentary series Mysteries with Carol Vorderman, which featured a segment on the writer's disappearance.