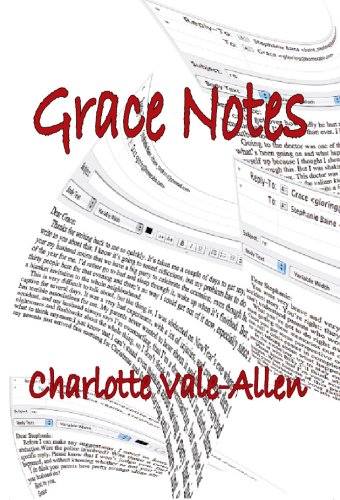 Grace Loring, a successful author haunted by the experience of being a battered wife, turned that experience into a non-fiction book on domestic violence, Hit or Miss. The book became an immediate bestseller, and both critics and readers praised her courage and honesty. Women began to contact Grace, and she willingly offered advice to others struggling with the shame and terror of domestic violence.

Now, years later, Grace has evolved into a caregiver for her brother, who has fallen prey to the crippling effects of rheumatoid arthritis. Though she adores Gus, Grace is feeling ever more pressured as his expensive care slowly drains her resources. Her daughter, twenty-two-year-old Nicky, provides most of the brightness in their lives, but Grace�s funny, clever and irreverent daughter is soon to graduate from college and leave home.

Stephanie Baine enters Grace's life via a simple e-mail saying how much she enjoys Grace's work. Grace replies and a short time later another message from Stephanie arrives, asking, "Is it really you? Or does someone else answer your e-mail for you?" Grace falls into an intense personal e-correspondence with the woman. As Stephanie chronicles intimate details about her tragic past and her present situation of escalating physical and verbal abuse, Grace seeks to console and counsel the young woman.

To her surprise, Gus cautions Grace against getting involved. "She could be anyone," her brother insists. Angered by his take on the situation, Grace ignores him and continues her e-mail correspondence, advising Stephanie to take whatever steps necessary to escape from her husband.

When Stephanie's e-mails abruptly stop, Grace is thrown into a state of dread, fearing the worst. But as she embarks upon an investigation of the sinister circumstances surrounding Stephanie's "silence," what she learns casts doubts on what she's been told. Then, when Stephanie gets back in touch, Grace is forced to wonder what is true and what isn't. Something is terribly wrong. But what?

"She could be anyone."

Who is Stephanie Baine? What does she really want?

Allen, the popular author of several works of contemporary fiction that often deals with incest, abuse, or other awful human behaviors, may be most familiar to readers for her book Daddy's Girl (1980), which detailed her own childhood and the sexual abuse she suffered at the hands of her father. Here Allen tells the story of Grace Loring, a one-time victim of spousal abuse who is now a successful novelist. Despite still being haunted by her experiences, Grace often provides advice and counsel to those of her fans suffering domestic violence. She soon begins a personal correspondence via e-mail with a young woman who is suffering horrifying acts of abuse from her husband, which she describes to Grace in graphic detail. When the woman mysteriously stops writing, Grace fears the worst and begins an investigation that unearths more questions than answers. Despite its serious subject, Allen has written a gripping and diversionary read. Fans will enjoy the surprising plot twists and turns.