Showing Grant and Twain: The Story of a Friendship That Changed America by Mark Perry 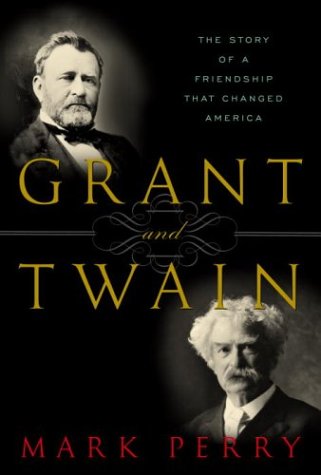 In the spring of 1884 Ulysses S. Grant heeded the advice of Mark Twain and finally agreed to write his memoirs. Little did Grant or Twain realize that this seemingly straightforward decision would profoundly alter not only both their lives but the course of American literature. Over the next fifteen months, as the two men became close friends and intimate collaborators, Grant raced against the spread of cancer to compose a triumphant account of his life and times—while Twain struggled to complete and publish his greatest novel, Adventures of Huckleberry Finn.In this deeply moving and meticulously researched book, veteran writer Mark Perry reconstructs the heady months when Grant and Twain inspired and cajoled each other to create two quintessentially American masterpieces.

In a bold and colorful narrative, Perry recounts the early careers of these two giants, traces their quest for fame and elusive fortunes, and then follows the series of events that brought them together as friends. The reason Grant let Twain talk him into writing his memoirs was simple: He was bankrupt and needed the money. Twain promised Grant princely returns in exchange for the right to edit and publish the book—and though the writer’s own finances were tottering, he kept his word to the general and his family.

Mortally ill and battling debts, magazine editors, and a constant crush of reporters, Grant fought bravely to get the story of his life and his Civil War victories down on paper. Twain, meanwhile, staked all his hopes, both financial and literary, on the tale of a ragged boy and a runaway slave that he had been unable to finish for decades. As Perry delves into the story of the men’s deepening friendship and mutual influence, he arrives at the startling discovery of the true model for the character of Huckleberry Finn.

With a cast of fascinating characters, including General William T. Sherman, William Dean Howells, William Henry Vanderbilt, and Abraham Lincoln, Perry’s narrative takes in the whole sweep of a glittering, unscrupulous age. A story of friendship and history, inspiration and desperation, genius and ruin, Grant and Twain captures a pivotal moment in the lives of two towering Americans and the age they epitomized.