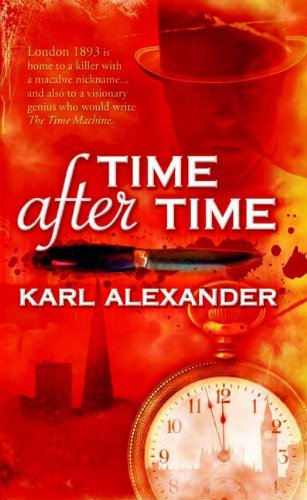 In 1979 Karl Alexander burst upon the literary world with a brash, exciting novel with a unique concept: H. G. Wells, the famous, bestselling author of such sensations as The Time Machine and War of the Worlds had actually invented a time machine.

When Wells showed it off to his famous friends—such as Henry James, Ford Madox Ford and other literary lights of 1893 London, he never suspected that another guest, his college friend, surgeon Leslie John Stephenson, was in truth the infamous Jack the Ripper. When Scotland Yard detectives showed up at Wells’s house to inquire about Stevenson, Jack took the machine and fled to the future—1979 San Francisco. When the time machine, as designed, returned to its point of origin, Wells followed the Ripper to the future. Wells felt obligated to bring him back to justice. Once in San Francisco, Wells realized that he also must save that city . . . and a particular lovely young woman . . . from a new reign of terror at the hands of the depraved, grisly Jack.

The rest of the story is well known, because Time After Time became the very successful Malcolm McDowell / Mary Steenburgen film of 1980. A bestseller in the U.S., England and elsewhere when it was first published, this irresistible thriller about famous real-life people has been unavailable for nearly thirty years. A battle of wits between the Victorian adversaries as exciting and suspenseful as it was when first published, this classic time-travel thriller will be a grand treat for a new generation of readers.

At the publisher's request, this title is being sold without Digital Rights Management software (DRM) applied.