Showing Florence, Rome, and the Origins of the Renaissance by George Holmes 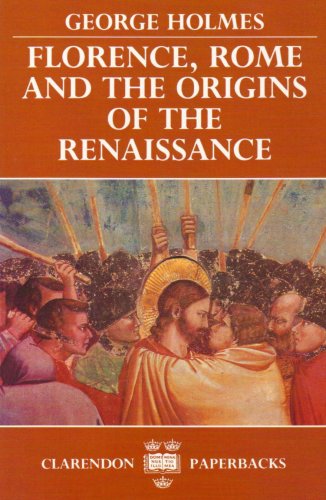 This study sets out to place the remarkable cultural events of the early Renaissance in a full historical perspective. Dealing with both literary and visual art, it describes the world of Dante and Giotto and explains the circumstances in which their innovations became possible. The political, economical, cultural, and religious life of Tuscany between 1260 and 1320 is explored, and the importance of the relationship with the papal court emphasized. Papal patronage encouraged classical influence on the visual arts; but the Papacy also played a leading role in the political and economic life of the 'Guelf League', in which it was linked with Florence, Siena, Naples, and France. Papal intervention in Florence in 1301, leading to Dante's exile, and the Papacy's removal to France in 1305, created new conditions in which the masterpieces of Dante and Giotto were created. This is the first paperback edition of Florence, Rome and the Origins of the Renaissance, which was published in hardback in 1986.