Showing The immigrants : the great migration from Britain to New Zealand, 1830-1890 by Tony Simpson 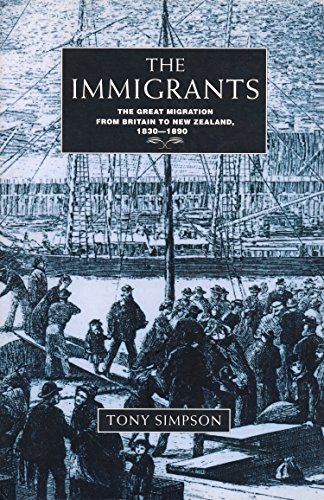 The fascinating social, economic and political story of nineteenth century immigration to New Zealand. In the nineteenth century, several hundred thousand left their homeland bound for New Zealand. In this fascinating book, Tony Simpson describes what is one of the most astonishing periods of migration in history. Against the social, economic and political background in both countries, he presents the human story - the harrowing experiences of the journey and life in a new country - and looks at the importance of immigration to New Zealanders. Tony Simpson is an award-winning social and cultural historian who has written some 15 published titles along with numerous articles and presentations and much journalism. He is a graduate in politics and history of the University of Canterbury (MA 1968), and has worked as a radio producer, an industrial advocate, television and film script writer, arts administrator and strategic planner and policy analyst. Among his better known works are The Sugarbag Years, an oral history of the Great Depression which gained a second place in the then Wattie Awards in 1975, Te Riri Pakeha, a history of Maori land loss between 1840 and 1970, The Immigrants: The Great Migration from Britain to New Zealand 1830-1890, and A Distant Feast which deals with the introduction of the European cuisine into New Zealand in the nineteenth century and the culinary traditions behind it.