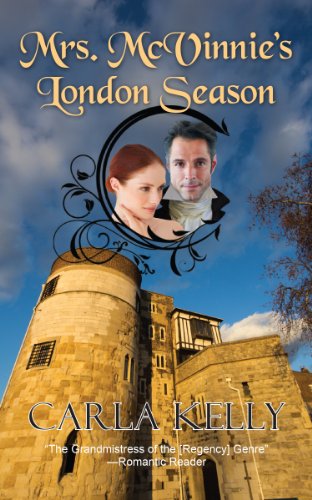 Widowed at 24 by war, Jeannie McVinnie wishes to free her father-in-law to join his old regiment for a Highlands fishing trip. She practices a small deception by accepting an invitation issued to another Jeannie McVinnie: a plea for help from Captain William Summers to his former nursemaid to oversee the London Season of his spoiled ward. Their chaotic household also includes the captain’s snobbish sister, a boy eager for adventure, and a desolate child. The task is daunting, but Mrs. McVinnie finds herself aided by her Scottish brogue, country-bred beauty, plain-speaking, and Beau Brummell himself, that supremely influential dandy of all dandies. Tempting as the Beau might be, Jeannie is drawn to gruff, quixotic Captain Summers. But what kind of future can a man so shackled to life at sea offer a woman who yearns for her own Scottish hearth? And how can she explain the secret she is hiding from those dear to her?