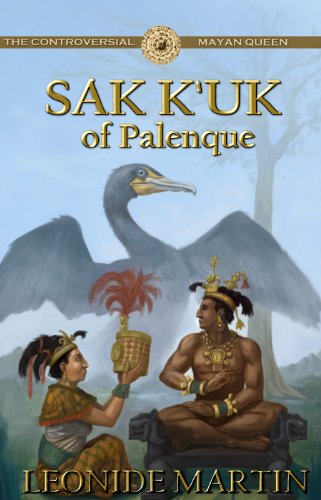 In the ancient Maya world of towering stone cities surrounded by dense tropical jungles, a strong-willed young woman struggles to preserve her family dynasty. Sak K'uk, daughter of the first woman Mayan ruler, is more fit to accede than her artistic brother and she chafes at his lack-luster leadership. In visions she sees that her son K'inich Janaab Pakal is destined to become the greatest ruler of Lakam Ha (Palenque), but how it will happen is uncertain.

A sudden attack on Lakam Ha led archenemy Kan and plotted by the vengeful Ek Chuuah, exiled from their city by Sak K'uk's grandfather, changes everything. Lakam Ha is thrown into chaos by the desecration of their most sacred shrine, destroying the portal to Gods and Ancestors. The royal family is humiliated, and the capture and death of her brother and father leaves the city without leaders. With the sacred portal in collapse, the help of the Triad Gods cannot be attained and the people are devastated.

Desperate and disheartened, Sak K'uk undertakes perilous journeys into the Underworld to seek guidance. She meets the Primordial Goddess Muwaan Mat who promises to co-rule with her until her son Pakal is old enough to accede. Can Sak K'uk convince the dissident nobles to accept this joint rulership, when they are disillusioned with her family over the defeat by Kan? All her willpower and skills must be activated to navigate through this spiritual crisis and hold the throne so her son can fulfill his destiny to restore the collapsed portal. Through these intense trials, a special bond is forged between mother and son that proves both a blessing and a curse.

In modern times archeologist Francesca continues her quest to uncover the identity of the crimson skeleton found in the Temple XIII royal burial by her team at Palenque. She is also perplexed by her grandmother's cryptic message to discover her true self by listening to the lightning in her blood.