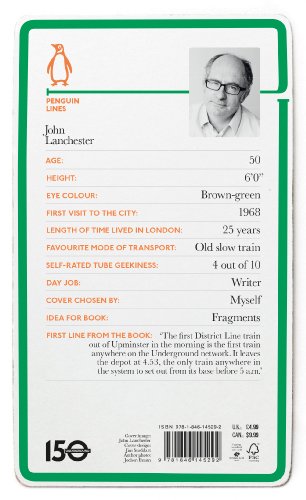 John Lanchester, author of Whoops! and Capital takes us on a whirlwind tour of the Tube to show its secrets, just how much we take for granted about it, and what we're really talking about, since we so often do talk about it. In short, he shows what a marvel it is - part of a series of twelve books tied to the twelve lines of the London Underground, as Tfl celebrates 150 years of the Tube with Penguin. Also available in a boxset: "Perhaps best of all [in the series] is John Lanchester's essay, which gets the balance between humour and history just right, and made me feel a new fondness for the somewhat creaky and unreliable District line". (Observer). "If ever you want a short book about the tube, its history and what it means today, then this is it". (A Common Reader). "One of the most thoughtful of these new books...John Lanchester explains in his specially lucid way how the Underground is still shaping London". (Evening Standard). "Authors include the masterly John Lanchester, the children of Kids Company, comic John O'Farrell and social geographer Danny Dorling. Ranging from the polemical to the fantastical, the personal to the societal, they offer something for every taste.All experience the city as a cultural phenomenon and notice its nature and its people. Read individually they're delightful small reads, pulled together they offer a particular portrait of a global city". (Evening Standard). "Exquisitely diverse". (The Times). "Eclectic and broad-minded ...beautifully designed". (Tom Cox, Observer). "A fascinating collection with a wide range of styles and themes. The design qualities are excellent, as you might expect from Penguin with a consistent look and feel while allowing distinctive covers for each book. This is a very pleasing set of books". (A Common Reader blog). "The contrasts and transitions between books are as stirring as the books themselves...A multidimensional literary jigsaw". (Londonist). "A series of short, sharp, city-based vignettes - so