Showing May Week Was in June by Clive James 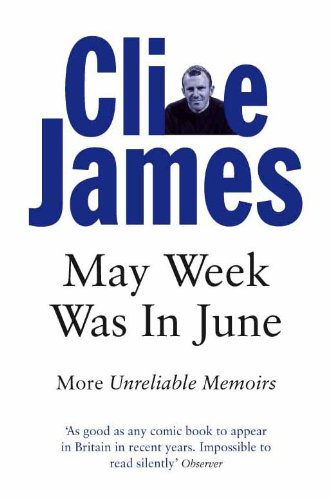 ‘Somebody once said that a trilogy ought ideally to consist of two volumes. Unfortunately he never said anything else, so his name is forgotten.’ Falling Towards England, the second volume of Clive James’ Unreliable Memoirs, was meant to be the last. Thankfully it is not. When we last met our hero he was living a hand-to-mouth existence while London was swinging its way into the Sixties. Pembroke College, Cambridge offered a way out, if not up. Here Clive threw himself into Footlights, film reviewing, writing poetry, falling in love (often), anything so long as it wasn’t on the curriculum. He became literary editor of Granta, wrote for the New Statesman, took Footlights to the Edinburgh Fringe, and worked on Expresso Drongo , arguably the worst film ever screened at the NFT. Then during May Week, which was not only in June but was two weeks long, he married . . . and most of the rest is history. Inevitably sharp and always outrageously funny, Clive James is perhaps the most brilliant on the subject he knows best: himself. ‘James, in an equivocal and not necessarily disparaging sense of the world, is a conceited writer, the Cleveland of modern English prose, every line propelled by a firecracker witticism . . . It’s a funny book’ Frank Kermode, London Review of Books ‘Nobody writes like Clive James; he has invented a style’ Spectator ‘In his prose, he can turn phrases, mix together cleverness and clownishness, and achieve a fluency and a level of wit that make his pages truly shimmer . . . May Week Was In June is vintage James’ Financial Times