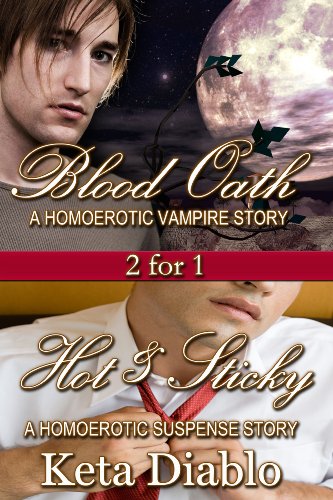 About Blood Oath:
When Kale MacDonald’s beloved grandmother dies, she leaves him a letter urging him to travel to Savannah, GA, to find his destiny. Kale is confronted by a strange, decadent man who appears to be stalking him. He’s also confronted by a trio of rogue vampires intent on killing him. Mystery and danger collide in the City of Secrets, and no one is who they appear to be.

About Hot and Sticky:
It's been extremely difficult for Hugh Landon, an up-and-coming lawyer in Washington, D.C., to control his sexual fantasies about his paralegal, Milan Vassar. When his career hangs in the balance over a missing file, Hugh must call Milan at the midnight hour and plead for assistance. Hugh's determination not to mix business with pleasure disintegrates when Milan arrives at the office not only to help him, but to confess he's held the same secret desires for his boss.
* * *
"The sexual heat and passion is off the charts in the ebook and you will LOVE it. Sexy, fun and lusty, just the way I like it.A pleasure to read and kept me wanting for more!" 4 STARS
* * *
"I want more from Keta Diablo. Her writing voice is unique & captivating. She allowed me to become a part of her characters’ lives. I journeyed with them through their initial attraction, budding relationship, & savored the satisfying conclusion. If you are a faithful M/M romance reader, or curious to indulge for the first time, you must pick up Hot and Sticky the moment it’s released. Loved it!" Dark Divas - 5 Stars
* * *
"Keta Diablo is one of my favorite erotic romance authors. I enjoyed her male/male contemporary erotic romance releases Crossroads, Crossroads Revisited and Crossroads Showdown, the first three books in her Crossroads series. Then I got the chance to read her just released Male/Male contemporary short story, Hot and Sticky. Wow! Diablo has yet again delivered a steamy hot Male/Male story that had me wanting more even after I finished the story." Talk About My Favorite Authors 4.5 Stars
* * *
Snippet from the Book:
Hugh looked at his watch & frowned. Midnight. Nothing could be done about the late hour. Panic time had struck and he had no choice. He plucked his cell phone from his pants’ pocket, flipped it open, and scrolled through his contact list to find Milan’s number. Two more clicks and one exasperated breath later, he waited for the man who looked like a Bulgarian prince to answer his cell.
While the rings tallied up, a montage of images ran through his mind, all of Milan. His heart quickened as the man’s face came into focus—the full, generous mouth, sculpted cheekbones, and eyes the color of aquamarine gems. He thought about his luminous orbs while praying the call wouldn’t roll into voice mail. There really wasn’t another word to describe the man’s eyes.
A pendant of the same color often graced his mother’s slender neck, an ostentatious bauble he loved to hold under the sunlight. At times the gold-encased stone looked green, at other times blue. When the sun hung low on the horizon, he couldn’t differentiate between the two shades. She called it her beryl pendant, a blue-green variety among precious stones.
“Hullo,” the familiar, somnolent voice said.
“Milan, Hugh, Hugh Landon.”
A pause came and then a slight chuckle. “I don’t know any other Hugh.” He laughed again. “What’s up?”
A funky beat in the background poured through the line. “I’m sorry to be calling so late but I’m in a terrible jam.”
“What, Mr. Landon? You’ll have to speak up. I’m at Zorbaz.”
“I can’t hear you either. Where did you say you were?”
“In a bar, a two-bit dive.”
Beyond caring whether his paralegal spent the night trashed at the Taj Mahal or a two-buck-chuck pub, he said, “Listen, I’m looking for a file, the one with the arresting officer’s report on the Darling case.” A woman’s sex-drenched voice, backed up by a guitar and a bass drum reverberated in Hugh’s ear. “I’m at the office!” he screeched. “And I need that file"
* * *