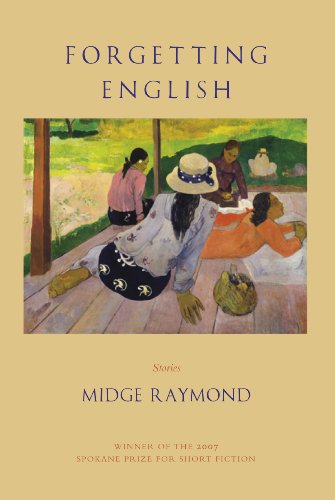 Winner of the 2007 Spokane Prize for Short Fiction

Forgetting English explores the indelible imprint of home upon identity and the ways in which new frontiers both defy and confirm it. From a biologist navigating the icy moonscape of Antarctica to a businesswoman seeking refuge in the South Pacific, the characters who inhabit these stories travel for business and for pleasure, out of duty and in search of freedom, and each comes face-to-face with the unexpected.

Midge Raymond’s short fiction has been featured in the Los Angeles Times magazine, American Literary Review, North American Review, the Ontario Review, Witness, and others. She holds an MA from Boston University’s College of Communication, where she taught for six years, and has also worked as an editor and copywriter. She now lives in Seattle, where she teaches at Richard Hugo House.

“All of her stories are heartbreakingly honest ... I wouldn't be surprised if she started getting compared to Alice Munro or Jhumpa Lahiri." -- Seattle Books Examiner

“The short-story collection Forgetting English by Seattle writer Midge Raymond transports the reader by closely observing characters' routine gestures and affect, and with carefully chosen material details which inform without contrivance. Parts of these polished stories, if read aloud, would sound like a smart patient describing a dream to a psychoanalyst. Raymond's prose often lights up the poetry-circuits of the brain, less because of lyrical language and more due to things that work as both literal and symbolic nouns: stolen rings, voice-mail messages gone astray; heavy-footed humans in the middle of fragile habitats. … This isn't Chick Lit. Raymond has an unusual ability (not unlike writer Jim Harrison in his early fiction) to create utterly female or decidedly male characters who feel like kindred spirits regardless of where the reader sits on the gender continuum.” --The Seattle Times

“When you forget English, you might learn to speak the forbidden language of your sister’s Tongan lover--you might find you understand the sweet murmur of the Gentoo and the ecstatic cry of Emperor Penguins. . . . Midge Raymond’s stories are a revelation and a delight, a journey from the frozen desert at the bottom of the world to the lush rainforest of Hawai’i. Prepare yourself to think in Chinese, to start over, to reveal your worst crime and discover you are a stranger to yourself, born again into a world where all things become wondrous and new, terrifying and possible.”
—Melanie Rae Thon, author of Sweet Hearts and Iona Moon

“Midge Raymond’s exquisitely written stories turn on relationships, and not just of one kind—between lovers, yes, but also within families, between sisters, among friends, or forged in chance encounters with strangers— and the turning often occurs in moments when the utterly mundane has abruptly conjured itself into crisis. . . . Raymond’s eye for telling detail is very fine, as one expects of an accomplished writer, but to this she adds the informing eye of a natural historian of place. ”
—John Keeble, author of Nocturnal America

“Midge Raymond turns her elegant, austere sentences precisely, forcing unmediated, intimate connection with readers of her exotic tales. It's nothing short of style-alchemy, spare tales and lean words and stark characters sculpted so articulately they whisper the secrets of pure language itself. Forgetting English is well-named, a text informed by aesthetic convictions, recognizable people, alien circumstances, sentences that bind reader to writer, finally a composer's offering of untranslatable but realized emotion. Raymond will be noticed; she's written at a height of elegance and authenticity that no teacher can quite bestow, but that any reader will feel. Forgetting English reminds us why we read new writers.”
--Mark Kramer, Founding Director and Writer-in-Residence, Nieman Program on Narrative Journalism, Harvard University