Showing The Sound of Freedom: Marian Anderson, the Lincoln Memorial, and the Concert That Awakened America by Raymond Arsenault 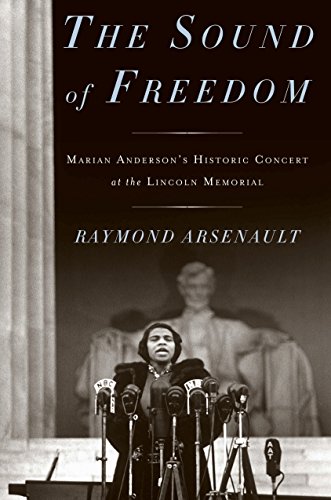 Few moments in Civil Rights history are as important as the morning of Sunday April 9, 1939 when Marian Anderson sang before a throng of thousands lined up along the Mall by the Lincoln Memorial. She had been banned from the Daughters of the American Revolution's Constitution Hall because she was black. When Eleanor Roosevelt, who resigned from the DAR over the incident, took up Anderson's cause, however, it became a national issue. The controversy showed Americans that discrimination was not simply a regional problem. As Arsenault shows, Anderson's dignity and courage enabled her, like a female Jackie Robinson - but several years before him - to strike a vital blow for civil rights.

Today the moment still resonates. Postcards and CDs of Anderson are sold at the Memorial and Anderson is still considered one of the greats of 20th century American music. In a short but richly textured narrative, Raymond Arsenault captures the struggle for racial equality in pre-WWII America and a moment that inspired blacks and whites alike. In rising to the occasion, he writes, Marion Anderson "consecrated" the Lincoln Memorial as a shrine of freedom. In the 1963 March on Washington Martin Luther King would follow, literally, in her footsteps.