Showing The Frankfurt Auschwitz Trial, 1963-1965: Genocide, History and the Limits of the Law by Devin O. Pendas 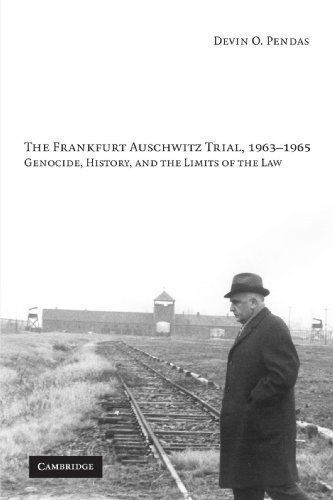 The Frankfurt Auschwitz trial was the largest, most public, and most important trial of Holocaust perpetrators conducted in West German courts. Drawing on a wide range of archival sources, Devin O. Pendas provides a comprehensive history of this momentous event. Situating the trial in a thorough analysis of West German criminal law, this 2006 book argues that in confronting systematic, state-sponsored genocide, the Frankfurt court ran up against the limits of law. Because many of the key categories of German criminal law were defined with direct reference to the specific motives of the defendants, the trial was unable to adequately grasp the deep social roots and systematic character of Nazi genocide. Much of the trial's significance came from the vast public attention it captured, and this book provides a compelling account of the divided response to the trial among the West German public.