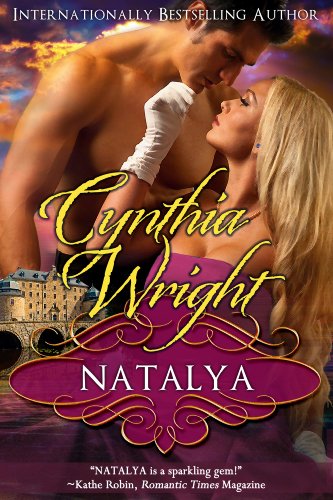 The captivating romance of CAROLINE's daughter ~

WINNER of the K.I.S.S. HERO AWARD from ROMANTIC TIMES MAGAZINE

1814: Grey St. James has escaped from Napoleon's prison on the rocky isle of Mont St. Michel. Desperate and dangerous, he is a far cry from the rakish nobleman who broke hearts in Regency London.

In her uncle Nicholai's French chateau, Natalya Beauvisage is writing a novel. At 26, she is beautiful but hardly marriageable, for she is devoted to being an author. However, when a potently attractive stranger appears to hold her at knifepoint, Natalya thrills to a flesh-and-blood man.

Grey must escape from France and Natalya longs to return to America, so they form an unlikely alliance, traveling through France, Regency England, and across the ocean to the Beauvisage home in Philadelphia. Natalya is caught up in a passionate fantasy that surpasses any she could imagine, but Grey's heart is imprisoned by dark secrets that must be uncovered before he can love again...

Reunite with the couples from CAROLINE, TOUCH THE SUN, and SPRING FIRES in this enchanting & witty historical romance!