Showing Night of the Furies by David Angsten 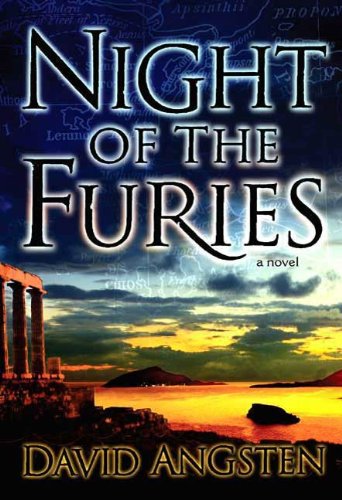 Two brothers and a beautiful archaeologist exploring ancient mysteries in the Greek Isles get swept into a deadly maelstrom of Bacchanalian horror....
It was the greatest secret of the ancient world, held under penalty of death. It lasted over millennia. A procession of thousands pouring out from Athens to gather on the plains of Eleusis. The giants of empires all took part---Socrates, Plato, Pericles, Augustus, Hadrian, Marcus Aurelius. A hallucinogenic elixir was poured. Secret, sacred objects revealed. In the great dark Hall of Initiation, an awe-inspiring transformation took place, a profound experience of death and rebirth....
Such was the celebrated pagan rite known as the Eleusinian Mysteries.
Midnight. Three figures descend a perilous cliff to the ancient site of the Oracle of Delphi. Jack Duran has joined his older brother, Dan, to perform an unusual---and unauthorized---experiment. With the help of Dan's girlfriend, the brilliant young archaeologist Phoebe Auerbach, the trio will put the famous Oracle to the test.
Breathing fumes in the ruins of the Oracle's temple, Phoebe falls into a trance of possession and succumbs to a terrifying vision, a foreboding premonition of horrors to come---and a clue to the secret of the Mysteries.
The clue leads Jack and Dan to a magnificent yacht crossing the Aegean. Soon they're plunged into a mind-blowing orgy with a bevy of irresistibly seductive young women. But the unrestrained erotic frenzy ends in a grisly killing. And Dan disappears Now a fugitive on a mysterious island, Jack must enlist Phoebe's help to uncover the islanders' hidden past---and face the diabolical vengeance of the Furies.
A heart-racing adventure thriller, Night of the Furies is a dark and exhilarating journey into contemporary Dionysian madness and horror.


"I sat down with Angsten's thriller in the afternoon, and I was still reading at 2 a.m. Dark Gold builds to a frantic and explosive climax."
--Royce Buckingham, author of Demon Keeper
"Take another look at this book's cover. What's hidden inside . . . will make your eyes widen."
--David Morrell, New York Times bestselling author of Murder as a Fine Art
"An alliterative, luridly readable pastiche of Crichton, Lovecraft, Jules Verne, and Robinson Crusoe."
--Entertainment Weekly
"Thrills and chills...sunken gold, black magic, sea monsters, a beautiful Brazilian in a bikini---what more could you want from a summer thriller?"
--Kirkus Reviews (starred)

"You've got yourself a page-turner that will take readers back to the days when a good book meant you stayed up all night under the covers with a flashlight. . . . Screenwriter Angsten's tall tale is for grown-up boys who lust for swashbuckling literary adventure set in tropical climes. Extra batteries for that flashlight are recommended."
--Publishers Weekly