Showing Circumference: Eratosthenes and the Ancient Quest to Measure the Globe by Nicholas Nicastro 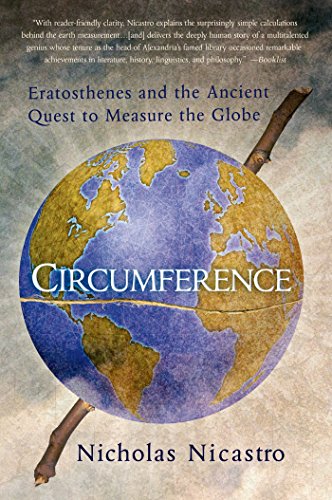 How do you measure the size of the planet you're standing on?

"Circumference" is the story of what happened when one man asked himself that very question. Nicholas Nicastro brings to life one of history's greatest experiments when an ancient Greek named Eratosthenes first accurately determined the distance around the spherical earth. In this fascinating narrative history, Nicastro takes a look at a deceptively simple but stunning achievement made by one man, millennia ago, with only the simplest of materials at his disposal. How was he able to measure the land at a time when distance was more a matter of a shrug and a guess at the time spent on a donkey's back? How could he be so confident in the assumptions that underlay his calculations: that the earth was round and the sun so far away that its rays struck the ground in parallel lines? Was it luck or pure scientific genius? Nicastro brings readers on a trip into a long-vanished world that prefigured modernity in many ways, where neither Eratosthenes' reputation, nor the validity of his method, nor his leadership of the Great Library of Alexandria were enough to convince all his contemporaries about the dimensions of the earth. Eratosthenes' results were debated for centuries until he was ultimately vindicated almost 2000 years later, during the great voyages of exploration. "Circumference" is a compelling scientific detective story that transports readers back to a time when humans had no idea how big their world was--and the fate of a man who dared to measure the incomprehensible.