Showing One Second After by William R. Forstchen 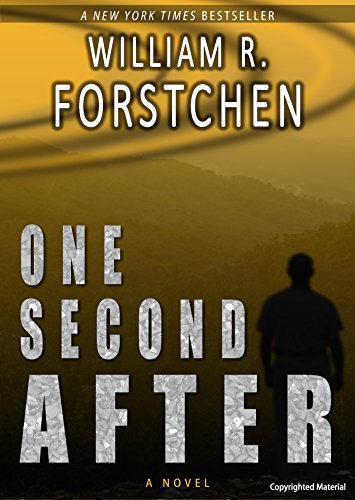 William R. Forstchen (DAY OF WRATH, PILLAR TO THE SKY) tells the story of one town’s survival over the course of a year, after attacks on the United States and parts of Europe leave much of the world in chaos. Nuclear weapons exploded in the upper atmosphere above the U.S. create an electromagnetic pulse (EMP) that wipes out all electronics – in one second. Electrical outlets, cars and trucks, internet, phones, television, refrigeration -- things we take for granted in the 21st century -- no longer work. Food becomes scarce, as do life-saving medicines and other staples of modern life.

John Masterson, a college professor in a small North Carolina town, works with the local police to organize his neighbors, ration available food and other supplies, and create a local army to guard the town’s borders against the increasingly violence of roving, desperate bands. Terrible decisions involving life and death come in to play as the country falls into chaos. Masterson and town leaders struggle to keep their own people alive in the midst of this escalating nightmare.

ONE SECOND AFTER was cited in Congress as a book all Americans should read. This bestselling novel has become a bible of the prepper movement.

“A blood-chilling wake-up call that chaos and death are but a power plug away. Stock up on food, water, medicine and batteries now. This horror could happen tomorrow.”
- William Bl. Scott, former editor and bureau chief of Aviation Week & Space Technology and co-author of SPACE WARS

"Bill Forstchen is highly respected in the military history community because he is the only one working in the field who understands the operational aspects of war, as well as the tactical and the policy/Strategic levels."
- Dr. Dennis Showalter, Past President of the Society for Military History, author of TANNENBERG, CLASH OF EMPIRES

On DAY OF WRATH:
“A THRILLING — AND TERRIFYING — TALE OF WHAT COULD BE OUR NEXT 9/11!”
- W.E.B. Griffin, New York Times bestselling author