Showing A hope in the unseen : an American odyssey from the inner city to the Ivy League by Ron Suskind 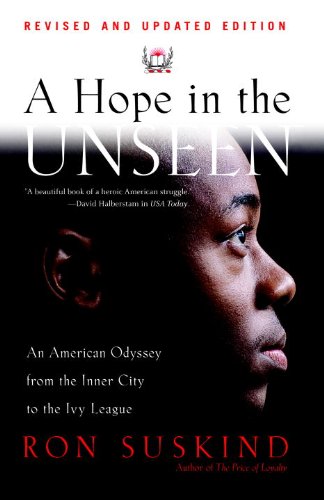 It is 1993, and Cedric Jennings is a bright and ferociously determined honor student at Ballou, a high school in one of Washington D.C.’s most dangerous neighborhoods, where the dropout rate is well into double digits and just 80 students out of more than 1,350 boast an average of B or better. At Ballou, Cedric has almost no friends. He eats lunch in a classroom most days, plowing through the extra work he has asked for, knowing that he’s really competing with kids from other, harder schools. Cedric Jennings’s driving ambition–which is fully supported by his forceful mother–is to attend a top-flight college.

In September 1995, after years of near superhuman dedication, he realizes that ambition when he begins as a freshman at Brown University. In this updated edition, A Hope in the Unseen chronicles Cedric’s odyssey during his last two years of high school, follows him through his difficult first year at Brown, and now tells the story of his subsequent successes in college and the world of work.