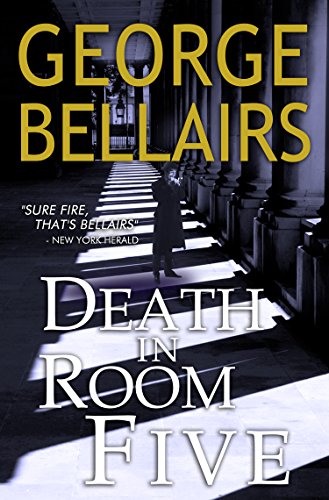 When a group from the small English town of Bolchester make an excursion to Cannes, little do they expect it to end so dramatically – with the disastrous murder of one of their party, the domineering Alderman William Dawson.

But, with so many grudges borne against Dawson, it becomes impossible to work out who might have been responsible for his death.

Was the fact that he had been a traitor in the maquis - the French resistance - during the war a factor?

And was his death connected to the subsequent killing of the crooked barkeeper Sammy?

When Scotland Yard call in Chief Inspector Littlejohn in to investigate, rudely interrupting his holiday in the Riviera, he comes up against a trying, taxing and peculiar case.

'Death In Room Five' is a classic detective mystery by one of the masters of the genre.

'Bellairs is up there with the greats of English crime fiction. Every fan of the genre should read him.' - Robert Foster, best-selling author of 'The Lunar Code'.

George Bellairs was the nom de plume of Harold Blundell (1902-1985), a crime writer and bank manager born in Heywood, near Rochdale, Lancashire, who settled in the Isle of Man on retirement. He wrote more than 50 books, most featuring the detective Inspector Littlejohn. He also wrote four novels under the alternative pseudonym Hilary Landon.