Showing Rancheros in Chicagoacán: Language and Identity in a Transnational Community by Marcia Farr 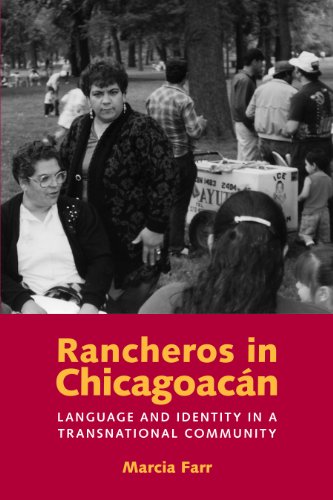 Rancheros hold a distinct place in the culture and social hierarchy of Mexico, falling between the indigenous (Indian) rural Mexicans and the more educated city-dwelling Mexicans. In addition to making up an estimated twenty percent of the population of Mexico, rancheros may comprise the majority of Mexican immigrants to the United States. Although often mestizo (mixed race), rancheros generally identify as non-indigenous, and many identify primarily with the Spanish side of their heritage. They are active seekers of opportunity, and hence very mobile. Rancheros emphasize progress and a self-assertive individualism that contrasts starkly with the common portrayal of rural Mexicans as communal and publicly deferential to social superiors.

Marcia Farr studied, over the course of fifteen years, a transnational community of Mexican ranchero families living both in Chicago and in their village-of-origin in Michoacán, Mexico. For this ethnolinguistic portrait, she focuses on three culturally salient styles of speaking that characterize rancheros: franqueza (candid, frank speech); respeto (respectful speech); and relajo (humorous, disruptive language that allows artful verbal critique of the social order maintained through respeto). She studies the construction of local identity through a community's daily talk, and provides the first book-length examination of language and identity in transnational Mexicans.

In addition, Farr includes information on the history of rancheros in Mexico, available for the first time in English, as well as an analysis of the racial discourse of rancheros within the context of the history of race and ethnicity in Mexico and the United States. This work provides groundbreaking insight into the lives of rancheros, particularly as seen from their own perspectives.