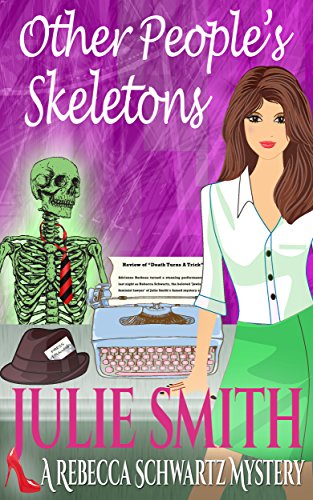 “Smith is a very funny writer with a nice feel for the absurdities of urban life.” -San Francisco Examiner

“Smith has perfect pitch ... and gives us a multilayered mystery. A believable heroine.” -Booklist

What she’s about to learn will rock her world!

Rebecca Schwartz, “Jewish feminist lawyer,” as she’s fond of saying, thought she knew her best friend--and her boy friend. Not to mention her family. But everything’s about to change.

Secrets spill out of these pages like hornets out of a nest, each with its own distinct sting, as author Smith weaves a thrill-packed and complicated San Francisco mystery that’s as much about how little we know about our nearest and dearest as it is about whodunit.

Rebecca’s shocked when Chris Nicholson, her glamorous law partner, is arrested for murder--but not nearly so shocked as when she discovers Chris can’t come up with an alibi. What she was doing, Chris says, involves a secret so damaging she’d be drummed out of San Francisco legal circles if anyone knew. All she’ll say is what her secret isn’t--crime, drugs, sex, alcohol, addiction, illness (mental or otherwise), or an eating disorder. So what’s left? Sure enough, when Rebecca uncovers it, her world tilts on its axis—and continues to list, ever more dangerously, as the story picks up speed and this formerly rational lawyer (and, ok, amateur detective) finds her worldview threatened by things she never knew existed. At least not in her circle! And Chris is far from the only one with a skeleton in her closet.

The murdered man, Jason McKendrick, was a much-loved columnist, a carefree bachelor with a million glamorous women, who also happened to have a very special friend who slept on a filthy mattress in his apartment. As Rebecca and Chris peel back the layers of Jason’s complicated world, they find he was leading not just a double life, but maybe many more. Only one person knows what made him tick. But can she stay alive long enough to tell his story?

WHO LIKES IT: Those who appreciate complicated plots, twists and turns, and the odd flight of fancy regarding philosophical issues. ( i.e, Is it real if you can’t see it?)

WHO DOESN'T: Some readers have felt this and the previous Rebecca Schwartz book, DEAD IN THE WATER, were somewhat different from the first three--edgier, more realistic, and...well, just not as funny. We say: guilty as charged; they’re a little more thoughtful. (Sorry! They just came out that way.) Some don’t like the way the characters wrestle with issues of religion and lack of same—so it's probably not for those offended by the notion that not everyone is Christian or Jewish. And some think it wanders a bit. Well, it does—into those aforementioned murky philosophical waters. If swimming in them makes you gasp for air, give this otherwise delightful, somewhat funny chick lit mystery a wide berth. Whatever you decide, we've got your back: if you think you’ll like it and you guess wrong, we’ll refund your money and throw in a free book! Just write to julieorleans@cox.net for your refund, new book, and a good soundoff. That’s right: punch us out. Give us hell. We aim to please, whatever it takes!

“Julie Smith writes like jazz should sound--cool, complex, and penetrating right to the heart.” -Val McDermid