Showing Agatha Raisin and the Walkers of Dembley by M. C. Beaton 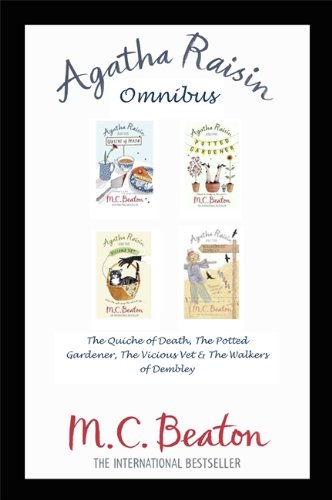 THE FIRST FOUR TITLES IN THE ACERBIC, ECCENTRIC AND HILARIOUS AGATHA RAISIN SERIES AT A BARGAIN PRICE.THE QUICHE OF DEATHRevenge is a dish best served warm...High-flying public relations supremo Agatha Raisin has decided to take early retirement. She's off to make a new life in a picture-perfect Cotswold village. To make friends, she enters the local quiche-making competition - and to make quite sure of first prize she secretly pays a visit to a London deli.Alas, the competition judge succumbs after tasting her perfect quiche, and Agatha is revealed as a cheat and potential poisoner. Definitely not the best start. So Agatha must turn amateur sleuth - she's absolutely got to track down the real killer!THE POTTED GARDENERAgatha goes digging where she shouldn't...Agatha is taken aback when she finds a new woman ensconced in the affections of her attractive bachelor neighbour, James Lacey. The beautiful Mary Fortune is superior in every way, especially when it comes to gardening - and with Carsely Garden Open Day looming, Agatha feels this deficiency acutely.So when Mary is discovered murdered, buried upside down in a pot, Agatha seizes the moment and immediately starts yanking up village secrets by their roots and digging the dirt on the hapless victim. But Agatha has an awkward secret too . . .THE VICIOUS VETAgatha lets sleeping vets lie...Retired PR boss Agatha Raisin is enjoying life in her pretty Cotswold village of Carsely. It even seems likely that the attractive new vet, Paul Bladen, has taken a shine to her. But before romance can blossom, Paul is killed in an accident with Lord Pendlebury's horse. Only the circumstances are rather suspicious.Agatha decides she must once more play amateur investigator. And this cloud has a silver lining - she can persuade her usually stand-offish neighbour, James Lacey, to become her partner in the quest. As usual, Agatha is quite prepared to rush in, heedless of the lurking menace to both James and herself.THE WALKERS OF DEMBLEYAn unexpected hike to the Other Side . . .After time away, Agatha Raisin returns to her beloved Cotswold village of Carsely - and to her handsome neighbour, James Lacey. True, James seems less than thrilled to see her, but Agatha is soon distracted by a sensational murder. The victim, found in a field, is young hiker Jessica Tartinck, who spent her life enraging landowners by insisting on her right to roam. Hope springs eternal in Agatha's breast as she lures the reluctant James into her investigation. There are so many leads to follow, for Jessica's fellow walkers - not to mention the landowners - all seem able to commit murder.