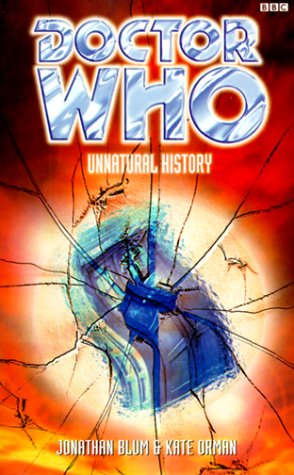 After the exhilaration of Dominion, in Unnatural History we are treated to a tired and unimaginative plod through a bunch of re-hashed ideas which all worked better in previous novels and stories. Jonathan Blum and Kate Orman do their usual trick of trying to be too clever and adding stuff to the "mythos" rather than concentrating on what matters--original plot and character. Obviously they haven't yet realised that Doctor Who on television went pear-shaped when it started to draw too much on itself rather than being original, and with this novel the BBC range does the same thing. Worst of all though is that this book is unengaging.

For a start, Sam is not Sam at all but some dark-haired variant hinted at in Lawrence Miles' Alien Bodies. In Miles' hands this was an interesting idea, a brief anomaly to be pondered over. In Blum and O rman's hands however she comes over exactly like the "older, wiser, more experienced" Sam they tried to create in Seeing I. Dark-haired Sam is unfortunately tedious and predictable. Fitz suffers in the same way... and he and D-H Sam getting it together is unbelievable. Good grief! How pointless.

Fitz changes from a slightly insecure but likeable male into some sort of obsessed shag-monster, alternating between dying for a smoke and lusting after anything female on two legs. Meanwhile D-H Sam--what with snogging the Doctor, sleeping with Fitz and agonising over her past and future--is a typical unstable, neurotic and angst-ridden female all too familiar from Orman's other novels. The Tardis too is made to suffer--like the reader--and the whole plot element about an alien collector of species and his Tardis-like specimen cabinet seemed to have been imported from another novel entirely. Add to this loads of techno-nonsense about bio-data and mythical creatures roaming San Francisco and you have a novel which goes nowhere, does nothing and ultimately bores the reader through too many disconnected pieces of information being thrown together.

A tremendous disappointment after the excellence of Dominion and Demontage. Let's have more books with single word titles that start with the letter "D"! --David J Howe