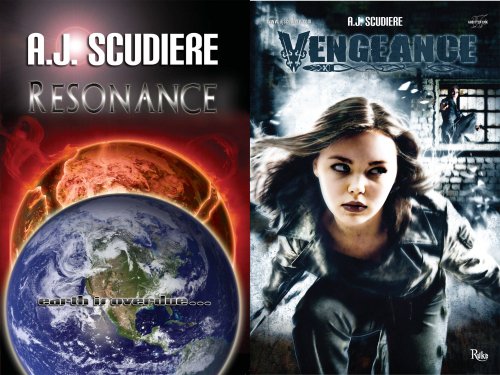 This is a combo pack of RESONANCE and VENGEANCE by A.J. Scudiere. You get both complete ebooks with one ISBN.

The shift is coming. Soon. Dr. David Carter knows this. However, he's a geologist, so 'soon' means anywhere from tomorrow to a thousand years from now. People are dying. Now. Drs. Jordan Abellard and Jillian Brookwood are standing at the edge of SuperAIDS. Or are they? They won't be able to figure it out if they can t get some authorization signed--and soon. But they're peons and no one is paying attention.

Whole species died at the last polar shift, 65 million years ago. Right now Dr. Becky Sorenson has some seriously mutated frogs in her lab. In Los Angeles, Bees are making abnormal columns on the side of the freeways. In Georgia, birds are migrating out of season. It all makes a sick kind of sense when the doctors consider that the last magnetic shift is strangely coincidental to the dinosaur die-out. And the only similarity in the problems today is that each is occurring in a 'hotspot'--a pocket of reverse polarity tells them all the shift is already here.

Nine years ago, Claymore Beller tried to do the right thing. It was the last thing he did. In retaliation for his efforts, his mafia bosses laid waste to his family. Only the youngest-Cynthia-came up fighting.

Three years ago, Lee Maxwell made the same error. His wife and daughter paid for his mistake. In a haze of booze and regret, Lee disappeared.

Now, Owen Dunham is following the trail of the ‘Grudge Ninja’-only all his evidence is false and the profilers can’t get their heads around anything except the obvious fact that the Ninja is extracting a deadly revenge for an old wrong.

As the Ninja gets bolder and far more dangerous, Owen is forced to recognize that he hasn’t always made the right decisions–he’s spent far too much time trying to be right. Even as he questions whether bringing in the ninja is the right thing to do, the voice in the back of his head is telling him that it will make his career...