Showing Soul of the Heights: 50 Years Going to the Mountains (Falcon Guides) by Ed Cooper 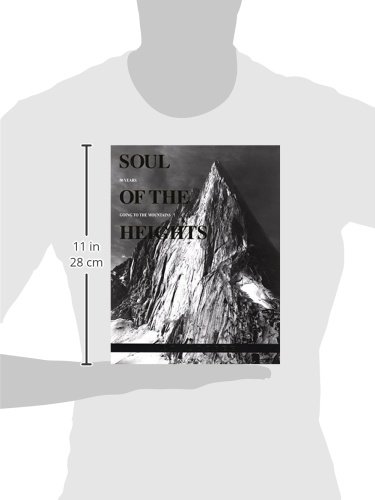 Soul of the Heights is the story of a pioneering climber with a passion for, and lifetime dedication to, the majestic mountains of North America. First conquering the awesome faces and peaks many of them previously unclimbed then photographing them with an intimate eye, Ed Cooper has maintained this love affair with the mountains for more than fifty years. His unique story evokes the now-legendary early days of mountaineering and includes exclusive first-hand accounts by climbers of that era about many of the first ascents of new routes that have since become top destinations for new generations of climbers. These historic ascents include routes in the Cascade Mountains of Washington State; the Chief, near Squamish, British Columbia; the Bugaboos, also in B.C.; and El Capitan in Yosemite Valley, California. These ascents were all achieved in the 1950s and early 60s at a time when climbing standards were rising dramatically. Fascinated by the challenge of the heights, Ed Cooper became the first climbing bum in the Pacific Northwest, where he rapidly acquired a reputation as one of the most important all-around climbers of his generation. This book provides rare insight into the world of mountaineering and rock climbing during that era, revealing the intensely competitive nature of the sport at a time when so many opportunities were available for carving a place in climbing history as the first to complete a new challenge. The young climber s evolving quest to photograph the essence of the mountains he held in such awe resulted in a series of spectacular portraits of many of the best-known peaks of North America. These images provide the visual drama in Ed Cooper s story, which also contains many historically interesting photographs of early climbs, and of such noted mountain personalities as Norman Clyde, Warren Harding, and Galen Rowell."