Showing A study in Southsea : the unrevealed life of Doctor Arthur Conan Doyle by Geoffrey Stavert 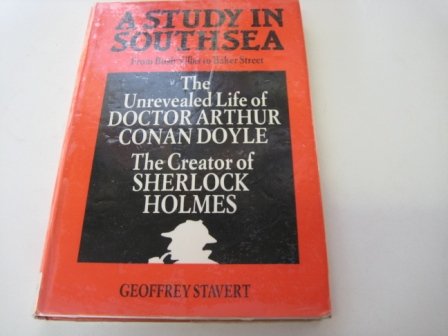 In November 1887 there appeared among the seasonal publications of the period a small paperback called Beeton's Christmas Annual. Its contents consisted of two short one-act plays, and a detective story entitled "A Study in Scarlet" by one A. Conan Doyle, a young doctor whose main business was running a one-man practice in Southsea, the residential suburb Of Britain's premier Naval port, Portsmouth. The hero of the story was a tall, pipe-smoking detective called Sherlock Holmes, who had a remarkable facility for deducing important conclusions from tiny particles of evidence such as hoofprints, tobacco ash, or the shape of a man's trouser knees. The narrator of his adventures was his friend and colleague Dr John H. Watson, an ex-Army surgeon with whom he shared bachelor quarters at No. 221B, Baker Street, London. The Annual quickly sold out and nobody thought much more about Sherlock Holmes - least of all the author himself. Dr Doyle had many other strings to his bow; he had written his detective story over a year before and was now deep into a historical novel, as well as trying to increase his medical practice by becoming a bit of an eye specialist. He certainly had no idea at the time that he had just created the most famous detective partnership in all fiction. The story of how Scottish-born Dr Conan Doyle came to Southsea and set up his practice from nothing is told in this book. In the space of eight years not only did he become one of the most well known and popular figures in the town, but also progressed from spare time short story writer to the most successful novelist of his day. It is very much more than just the story of Sherlock Holmes.