Showing Justine; or, the Misfortunes of Virtue by Marquis de Sade 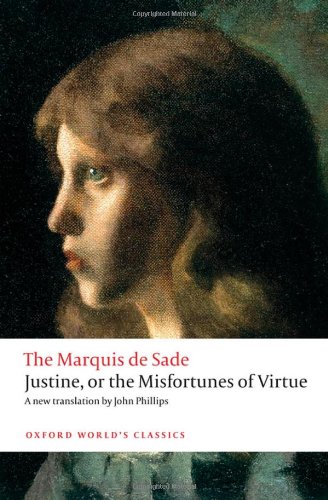 This is the first new translation in over forty years of Sade's novel Justine. It is also the first ever critical edition, based on the original 1791 version of the story, which is the most accessible and artistically successful of the three versions. The novel tells the story of the beautiful and devout Justine, whose steadfast faith and naive trust destine her from the outset for sexual exploitation and martyrdom. The unending catalog of disasters that befall her, during which she is subject to any number of perverse practices, illustrate Sade's belief in the primacy of Nature over civilization. Virtue is no match for vice, and as criminality and violence triumph, Justine is doomed to suffer. Indeed, the novel mounts a ferocious physical and intellectual assault on absolute notions of good and evil.

John Phillips's lively translation conveys the tone of Sade's original text and his introduction situates Sade's narrative in its historical, literary, and philosophical background, discussing such major themes as attitudes to women, the church, the justice system, and the world of finance, the sadistic and masochistic elements, and the novel's reception. The extensive notes shed light on religious and philosophical ideas and explain allusions to topical events.

About the Series: For over 100 years Oxford World's Classics has made available the broadest spectrum of literature from around the globe. Each affordable volume reflects Oxford's commitment to scholarship, providing the most accurate text plus a wealth of other valuable features, including expert introductions by leading authorities, voluminous notes to clarify the text, up-to-date bibliographies for further study, and much more.