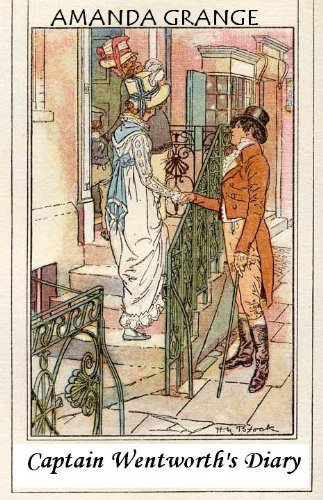 It is 1806 and the Napoleonic wars are ravaging Europe. Frederick Wentworth, a brilliant young man with a flourishing career in the navy, is spending his shore leave in Somerset, where he meets and falls in love with Anne Elliot. The two become engaged, but Anne’s godmother persuades Anne to change her mind, leaving Wentworth to go back to sea a bitter and disappointed man.

Eight years pass and peace is declared. Wentworth is no longer a young man with his way to make in the world, but a seasoned Captain with a fortune at his disposal. He is ready to marry anyone with a little beauty who pays a few compliments to the navy –or so he says - until he sees Anne.

Anne’s bloom has faded, yet she has the same sensibilities and superior mind she had eight years earlier, and before he knows it, he is falling in love with her all over again. Can there be a happy outcome for them this time around, or have they lost their chance of love forever?

"In this retelling of Jane Austen’s Persuasion, Captain Wentworth’s thoughts take centre stage, and very revealing they are too. His love, rejection, bitterness and ultimate constancy are laid bare, but never in a way that compromises the original. Amanda Grange has taken on the challenge of reworking a much loved romance and succeeds brilliantly." -- Editor's Choice, Historical Novels Review

"Amanda Grange’s retellings of Jane Austen’s novels from the point of view of the heroes are hugely popular and deservedly so . . . her latest novel, Captain Wentworth’s Diary, a retelling of Austen’s Persuasion, will entrance and enthrall old and new fans alike." - Julie Bonello, Single Titles